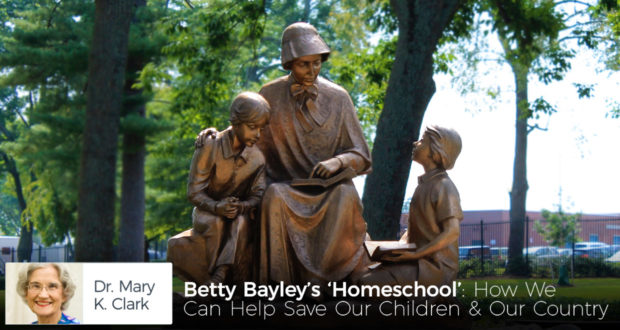 Betty Bayley’s ‘Homeschool’: How We Can Help Save Our Children & Our Country

Dr Mary Kay Clark shares the struggles and inspiration behind Elizabeth Ann Seton’s homeschool idea as a blueprint for saving our future.

St. Elizabeth Ann Seton can give encouragement to us homeschooling mothers as we begin the 2016 New Year.

Betty Bailey, as she was called in her childhood, had already suffered significantly by the age of three, with the death of her mother in 1777, and not long after, the death of her younger sister. Betty longed to be with her mother and sister and to live in Heaven.

This desire only grew stronger as her loneliness increased when her father remarried. He worked longer hours, and her new mother was busy with her own babies.

As Betty grew older, she attended the Protestant church with her family. She wanted to know more about the place called Heaven, so she spent time alone reading stories about the saints, and spoke frequently to Jesus and His mother Mary in prayer and in quiet conversations.

When Elizabeth became a teen, she still read Bible stories and saints’ stories, but she also went to the family’s Protestant church more frequently.

As a young adult in a doctor’s family, Elizabeth also spent time at parties and other social events. She was married before she was twenty. In spite of the demands of young motherhood, she continued her almost-constant prayer life.

A Travel to Italy

They stayed in the home of a Catholic Italian business friend, where Elizabeth’s eyes were opened to the fullness of the Catholic Faith. The Italian family went to daily Mass and said the daily Rosary.

After the death of her husband, Elizabeth stayed with the Italian family to further study the Catholic Faith. She realized that the Protestant church she attended denied the True Presence of Jesus in their communion service.

Many of the teachings of the Catholic Church were beliefs Elizabeth had already accepted. The daily Mass and the Rosary seemed to fill in the “gaps” she had felt for years with the Protestant beliefs.

When Elizabeth returned to America, she joined the Catholic Church. However, members of her family and of her husband’s family would no longer associate with her because they had so much hatred toward Catholics.

She was ostracized by the local Protestant authorities, and had to find a new home at a time when homes and churches of Catholics were being burned to the ground in the New York area.

As a widow with children to raise, Elizabeth decided to start a simple, private, almost-secret “home” school. She used her own home as she taught her own children and a few other children.

In a very short time, her little group of students grew larger. Finally, through Bishop Carroll, she was able to start the first Catholic girls’ school in Emmitsburg, Maryland, in 1809.

We Catholics today are finding that our Church teachings are being attacked in the local schools, in the general community, by state officials, and by U.S. Supreme Court decisions.

Government courts are ruling against people who want to live by the basic teachings of the Bible and of the Catholic Church. The Little Sisters of the Poor are among several of the present-day “martyrs.”

Others are being forced to sell their homes and businesses because they won’t “go along” with the anti-Christian “laws” which force Christians to go against their Christian beliefs and values.

Elizabeth Ann Seton realized that to keep her children from being influenced by ideas contrary to the teachings of Jesus, she needed to teach her children at home.

During Elizabeth’s lifetime, attacks on the Catholic Church were in Protestant-controlled states or colonies, but today, Christian values are being attacked at the state and national levels.

Anti-Christian laws and regulations are destroying many Catholic schools, churches, adoption agencies, and social service groups, not to mention families!

As we start the New Year, let’s remember to ask St. Elizabeth Ann Seton to help our homeschooled children promote the Catholic Faith throughout our country in the years to come.

Without the truths of Christ’s own church, the Catholic Church, our country will not be able to withstand the attacks of evil and unbelief.

But with the persevering witness of Catholics like St. Elizabeth, hearts, families, and even this nation may be converted.