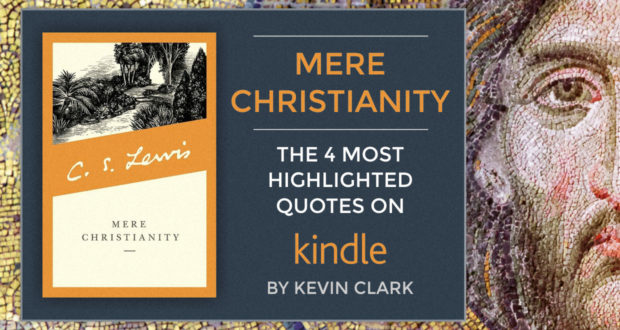 The 4 Most Highlighted Kindle Passages from ‘Mere Christianity’

The book Mere Christianity was published in 1952, but is based upon a series of radio broadcasts which C. S. Lewis made in the early 1940s.

There are certainly controversies which separate Christians, such as papal infallibility or the Real Presence, but Lewis wanted to write about a sort of “baseline” Christianity which would get the most important points across without broaching theologically contentious issues.

The book has been very influential for more than sixty years, and has been credited by many as an important part of their Christian conversion.

These, then, are the two points I wanted to make. First, that human beings, all over the earth, have this curious idea that they ought to behave in a certain way, and cannot really get rid of it. Secondly, that they do not in fact behave in that way. They know the Law of Nature; they break it. These two facts are the foundation of all clear thinking about ourselves and the universe we live in.

This is a rather interesting point when looked at from the perspective of evolutionary biology. Suppose that stealing and lying and cheating and murder are evolutionary adaptions which help human organisms to pass on their genes. If so, then the human organisms which do these things ought to have further adapted the belief that these actions are good. But they haven’t.

They know that these things, which may help their genes continue, are in fact morally wrong. That’s a rather startling thing to explain from a purely materialistic, evolutionary point of view.

Why do we not steal if there is no chance of being caught? Why do we not cheat when cheating would be easy? Why do we give money to save the lives of starving children half a world away?

In court, if someone cannot tell the difference between right and wrong, that person is considered insane. So, what should we make of modern society, which denies that anything is right or wrong?

Strictly speaking, there are no such things as good and bad impulses. Think once again of a piano. It has not got two kinds of notes on it, the ‘right’ notes and the ‘wrong’ ones. Every single note is right at one time and wrong at another. The Moral Law is not any one instinct or set of instincts: it is something which makes a kind of tune (the tune we call goodness or right conduct) by directing the instincts.

Grace builds upon nature. It does not deform nature or make it entirely something different. Grace leads us in those directions which our human nature already knows are right and good. In the same way, the Ten Commandments don’t tell us anything we don’t already know. No one is going around saying that bearing false witness is a good thing, or that really everyone should be practicing adultery—at least no one right in the head.

No, Christian morality, as given to us in the Bible and Holy Tradition, confirms us in the right action to which we are instinctively drawn. Like the letter chart in an optometrist’s office, sometimes we don’t see the truth clearly. Christian teaching is the lens we use to view truth more clearly, but the truth is always there, whether we see it or not.

In a paragraph, Lewis explains why we are not happy and what we need to do to be happy. So often we choose limited goods that we think will make us happy, rather than the true Good that will actually make us happy. We want to be holy, but not too holy.

We want to have faith and love and hope, but not too much of these, because that might put us off from those other things we want that are not of God. Sometimes God must break through all the noise and almost do violence to us to bring us to a point where we can focus only on Him, because only in Him is there peace.

The central Christian belief is that Christ’s death has somehow put us right with God and given us a fresh start.

Besides the moral law that is written on our hearts, there is another thing that we all know: that we are not worthy of God. We’ve fallen. We’ve sinned. We’ve been petty and shallow and mean. And really, it’s not just that we’ve done bad things, as if our actions are external to us. No, our actions define us, so that left to ourselves, we would not just perform mean and petty acts, but our souls themselves would be mean and petty.

There are many different theological conjectures as to why Christ redeemed us by means of the cross, when perhaps something less drastic might have been done. One idea is that we could never have known the extent of God’s love for us without having God die such a death for us. But another reason, perhaps, is that the cross shows us how radically things have changed. Before and after the cross, nothing about the world is the same.

Creation itself is unalterably changed by the death of the Creator. In that sense, the cross is a sign of hope, that we can put aside all the things that have encumbered us, and enter that new world of grace which the cross has ushered in.

Whatever we have done in the past, whatever our failings, whatever sins we have committed—we cannot ever look upon the cross and believe that our sins are greater than that sacrifice.