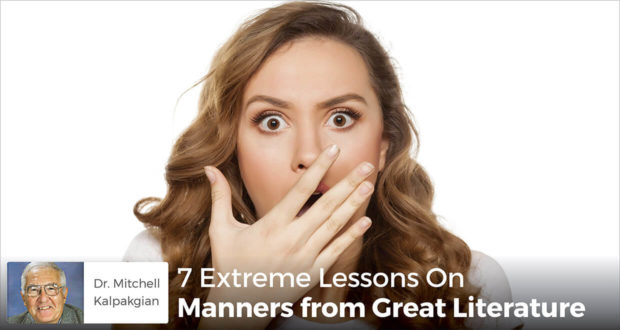 In a surprising sweep of literature, Dr. Kalpakgian explores seven sources of extreme lessons on manners. Without manners, can we live in peace at all?

How do modern manners compare to the civilized ways of

Does modern life acknowledge hospitality as a sacred commandment rooted in divine law? Are modern men knightly and chivalrous to women and capable of self-sacrifice?

Are conflicts and problems resolved according to the gentle ways of Shakespeare’s fairies, or are heavy-handed, harsh Draconian methods the norm of modern life? Are there any vestiges of the quixotic in modern civilization, or is it a crass iron age?

Is a man required to court a woman, honor her as a lady, and prove himself worthy of her hand with his good manners as Darcy does in Pride and Prejudice, or are men lacking in this skill?

Does modern education produce the kind of refined intellect and provide the type of intellectual culture that produces Newman’s gentleman, or does the modern university pursue only the agenda of tolerance and diversity?

Have Catholics and Christians learned from St. Francis de Sales that the good and the moral need to be beautiful and attractive, or have they separated manners from morals?

Do they know how to speak and dress graciously, or do they lack all good taste?

Are You a Goop?

In most college classrooms many men will wear a baseball cap and often turn it backwards, a habit they frequently repeat when they eat at others’ homes. As Gelett Burgess in his books of manners for children would say, “Are you a Goop?” At Sunday Mass during the summer, shorts, blue jeans, T-shirts, athletic shoes, and beach sandals are common attire.

As Jane Austen would say, they have “no style, no taste, no beauty.” Often in the middle of an important meeting, a college class, and even in church, the ring of a cell phone will abruptly interrupt and distract everyone’s attention.

As Cardinal Newman would say, “The true gentleman . . . avoids whatever may cause a jar or jolt in the minds of those with whom he is cast.” In the midst of a telephone conversation, one party might say, “Excuse me, I have another call,” and suddenly terminate the discussion.

As St. Francis de Sales would say, “To refuse to take part in conversation looks like lack of confidence in the others or some sort of disdain.”

Many professional people and college students have no sense of discrimination with regard to language and do not distinguish between formal and informal, standard and colloquial, or even between acceptable and inappropriate. “You guys” is now a way of referring to both men and women and to both peers and older persons.

As Don Quixote’s speech illustrates, the proper way to address women is “my ladyships,” “dear Sovereign Lady,” or “beautiful damsel.” Vulgarity, obscenity, and immodest clothing are a staple in Hollywood films and on many television programs. A knight-errant like Don Quixote, however, would object, “Do you dare to utter such words in my presence and in the presence of these distinguished ladies?”

Many young adults have no resources for initiating or enjoying conversation with older generations, and most teachers will attest that a painful silence or one-word answers are the norm for many small classes intended to cultivate dialogue.  As St. Francis de Sales would advise, “To avoid such conversations shows disdain and contempt of our neighbor.”

In short, this noticeable absence of tact, thoughtfulness, and sensitivity for the feelings, ages, and ranks of others exposes the loss of refinement or “fastidiousness” that Newman extolled as the quintessence of manners. If even educated people do not know how to speak, dress, or act properly in social or formal settings, then coarseness replaces graciousness, and mediocrity becomes the norm instead of excellence.

Manners—like clothing—elevate the quality of life to make it dignified and beautiful. Courtesy is the obligation “to dress up,” to speak or write formally with appropriate style, to be on one’s best behavior, and to conduct oneself like a gentleman or lady in the proper settings and circumstances.

However, the modern tendency of casualness and informality at all times and in all places and to all people—the habit of “dressing down”—only cheapens the quality of daily life to make it crass.

Don Quixote became a knight-errant to restore the age of gold to an age of iron, that is, to beautify and adorn the world to make ordinary life attractive, adventurous, and romantic. This quixotic element needs restoration in a culture that tends to treat men and women alike in a process of “leveling” instead of honoring women with deference and chivalry.

Nothing could be more unquixotic or ungentlemanlike than to treat women as if they were men or expect them to fight on the battlefield.

The term “dumbing down” applies not only to education which compromises intellectual standards and academic rigor but also to a culture which does not hold high expectations of adult conduct in manners or morals. The habit of cohabitation that replaces the custom of courtship and marriage also signals the loss of magnanimity, the ideal of the gentleman that Newman praised.

As Jane Austen illustrated in Pride and Prejudice, without good manners, romance does not happen; without romance, marriages of true love do not occur.  Without good manners in marriage—the forbearance, patience, gentleness, the art of pleasing, and the civil conversation that St. Francis de Sales exemplified—people do not enjoy one another or live in peace.

As homes fail to become places of cheerfulness and hospitality, the art of living suffers and people lose the social graces of hosts and guests. The role of manners, then, is to refine human behavior, to elevate the humdrum quality of ordinary life, and to beautify and dignify all relationships with the simple amenities that make each day attractive and sparkling.

Manners make women more feminine and gracious, men more magnanimous and noble, the common man more dignified and respectable, and children more civilized and charming. Unlike animals, humans wear clothes and adorn their bodies to distinguish themselves as refined beings who appreciate style, taste, and beauty.

Without the beautification of clothes on the body or the adornment of manners on the soul, man’s life is reduced to brutishness.

As Shakespeare’s King Lear explains to his daughters, a king is nothing without his servants and retinue; without jewelry and finery a woman’s nature is lowered; without manners that express gratitude, appreciation, respect, or sensitivity, “man’s life’s as cheap as beast’s.”