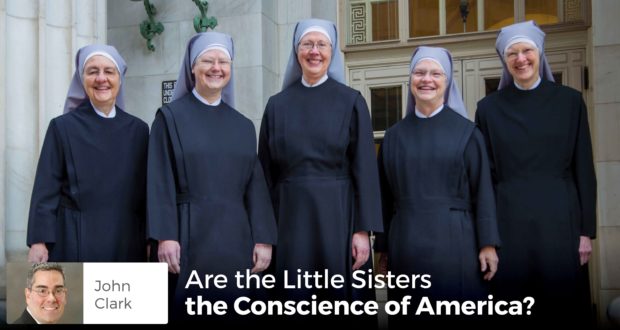 Are the Little Sisters the Conscience of America?

John Clark examines the court case involving the Little Sisters of the Poor and concludes that, at this moment in time, they are the conscience of America.

What Would “Victory” over the Little Sisters of the Poor Accomplish?

Unless you’ve unplugged your internet service and canceled your subscription to EWTN, you’ve heard of the ongoing saga of the Little Sisters of the Poor case.

But for a quick refresher, the case revolves around the idea that the Little Sisters of the Poor find it morally objectionable to cooperate with contraception, abortion, and/or abortifacients within the context of health insurance coverage (or within any other applicable context for that matter). In fact—and central to the point—the sisters will not cooperate either formally or materially with what they regard as evil.

That fact presents a question that no one seems to want to ask, but before I ask that question, let’s consider the following.

Some have attempted to make this look like a very convoluted case; however, from a legal perspective, the case is actually very simple. As one of the amicus briefs puts it:

“The answer to this question is less complex than it initially appears. The Little Sisters of the Poor have created a health care plan for their employees. It is their creation and their creature. It exists only because they created it. It is a creature of contract, a contract that they authored. It is ultimately their property. The government wants to use it because it finds it administratively convenient to do so. The Little Sisters object to having their property dragooned into these efforts.” (BecketFund.org)

Not only is the legal principle less than complex, so is the ethical principle. Intentional abortion and the use of abortifacients are direct violations of the fifth commandment; therefore, it naturally follows that cooperation with these evils cannot be justified.

No one questions the sincerity of the Sisters. The New York Times recounts an exchange between Justice Kennedy and the solicitor general in the case.

He (Kennedy) asked the solicitor general, Donald Verrilli, who is defending the law, “Do you question their belief that they’re complicit in the moral wrong?”

“Well, then,” Justice Kennedy said, “it seems to me that that’s a substantial burden.”

At some point in this case, one begins to wonder what it is that those rooting against the Little Sisters want. What does a victory look like? I wonder if they have even thought about it.

Before we address that question, it’s worth remembering that the Sisters could be given an exemption from this ordinance.

If they were given one, they certainly wouldn’t be alone. After all, Pepsi, the soda and snack conglomerate, was granted an exemption. Why can’t the Little Sisters get one? Is conscience in America now playing second fiddle to cola?

The Little Sisters of the Poor will not violate their consciences; that much is clear. They refuse to formally or materially cooperate in contraception or abortion, and no amount of jurisprudential kabuki is going to change their minds.

Here is a group of women who tirelessly care for the sick and the elderly. They scrub floors and take out bedpans. They provide friendship to those who have few friends. They hold the hands of the dying as the dying are born into eternal life. These Sisters have found those things that have proven so elusive to moderns: purpose, love, fulfillment.

Does that sound like a group of gals that will turn their backs on their beliefs?

And so, again, this prompts the question: what would a “victory” over the Little Sisters accomplish? Specifically, let’s imagine that the Supreme Court rules against the Sisters and mandates that they perform actions that violate their consciences and their Faith.

If they are forced to discontinue nursing care to the poor and elderly in America, is that a “high-five” moment for anyone? Is that a victory for someone? How many “victories” like that can America endure?

For the sake of our posterity, it is worth pointing something out that may not be appreciated for generations.