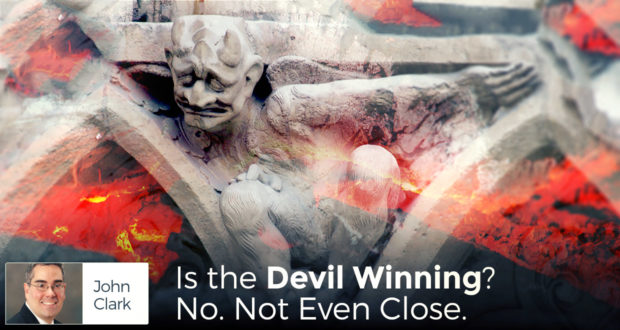 Is the Devil Winning? No. Not Even Close.

Looking around the world today, it may seem as though the devil is winning. After all, sin seems to be winning.

Indeed, the inverse of the Ten Commandments has become the operator’s manual for many sad souls. And so it is no surprise that the devil, the poster child for sin, is increasingly portrayed in books, movies, television, and music as a winner—a powerful, charismatic, and cool winner.

Many young people want to be just like him.

But it’s worth remembering something.

I’ve seen his losses firsthand in just the past few weeks.

A few days before Christmas last year, I went to a Penance service at which perhaps eight priests were present to hear confessions for about two hours. Each line contained dozens of penitents. A multitude of sins were forgiven; peace was restored; a world darkened by sin and hate was made lighter by grace and love.

Days later, on the feast of the Nativity, I saw dozens of people lovingly receive Holy Communion and unite their hearts to the Sacred Heart of the Infant King. I was one of them.

A few weeks after Christmas, I attended the ordination of a priest. During this liturgy, two of my sons were granted the honor of serving in that Divine Liturgy for the bishop.

This winter was ushered in with a Year of Mercy, and for many souls, it has not disappointed. Lives have been changed by the mercy of God. But it has disappointed the devil.

This winter, for all the cold and snow and wind and darkness, mercy has won many victories; yet, it has been the eternal winter of the devil’s eternal discontent. The devil loses all the time.

Clearly it follows that those who follow the devil are losing, too. John Milton famously envisions the devil positing that it is “better to reign in Hell than to serve in Heaven.”

There’s nothing “cool” about that.

And except in the rarest of cases, God keeps the devil on a short leash against those in the state of grace. In The Story of a Soul, Saint Therese commented that

“a soul in the state of grace has nothing to fear from the devil, who is a coward, and will even fly from the gaze of a little child.”

In our fight against the devil, Pope Paul VI put it simply: “Grace is the decisive defense.”

The problem is not that the devil is winning; the problem is that we let our defense down, making the devil’s job much easier. Our mission is to remain in the state of grace. And if we fall out of that sanctifying grace, we need to get it back.

Happily, God gave us a way back through the sacrament of Penance, and Lent is a great time to come home through this sacrament.

You might be thinking that the devil has already won in your life.

God is victorious over sin. He is just waiting for you to come to that victory party of Easter. Your invitation was engraved upon the Cross two thousand years ago.
As Saint John Chrysostom put it many years ago in an Easter sermon:

As for the devil “winning,” Chrysostom continues in that same Easter sermon: