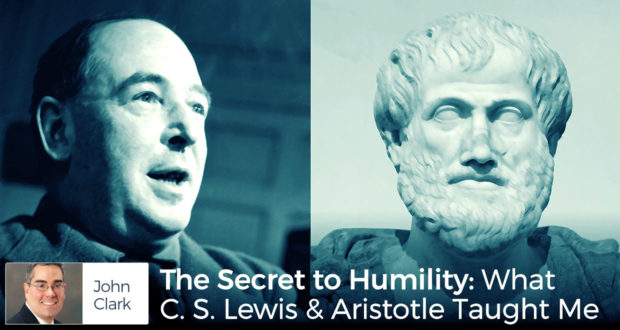 The Secret to Humility: What C. S. Lewis & Aristotle Taught Me

My father once taught me that the greatest way to emphasize something is to make an intentional understatement.

And as a homage to my Dad, I write the following: one of the nice things about reading great books is that sometimes you learn things. And the more that you read the classic books, the more you learn; the more that you see that truth builds upon truth.

I was reminded of this recently as I read Aristotle’s Nicomachean Ethics and C.S. Lewis’ Screwtape Letters within a few weeks of each other.

As it turns out, both men had something to say about the subject of humility, and it was not what I might have expected.

‘Proper Pride’ is the Goal?

Arguing that happiness is the end of man and that virtue is the way to achieve it, Aristotle takes the reader on a philosophical tour of virtue. As a way of explaining that virtues represent the mean between two extremes, the philosopher examines not only the virtues themselves, but the contrary vices.

During the course of this exercise, Aristotle writes: “With regard to honour and dishonour the mean is proper pride, the excess is known as a sort of ‘empty vanity’, and the deficiency is undue humility…”

“Proper pride” is the goal? To a Christian, that doesn’t sound right. How can pride ever be proper, and how can humility ever be undue?

A few weeks later, I read C. S. Lewis famous Screwtape Letters, in which Lewis outlines the psychology of temptation. “Screwtape,” the devilish protagonist observes how to trick humans into misunderstanding the meaning of humility:

As St. Bernard taught, humility is the virtue that allows us to see ourselves as we truly are. For that reason, insisting that we are something that we are not does not constitute humility (or any other virtue for that matter).

As Screwtape observes, if an intelligent man insists he is unintelligent, he is not only violating the truth; he is misunderstanding the virtue of humility. His notion reduces humility to a wishy-washy and easily attainable virtue.

Too often, we get very excited that we have answered the call of humility by making comments of self-deprecation; we get inebriated on some pretty weak tea.

However, humility offers us a more difficult challenge; it compels us to seek the glory of God rather than ourselves. In Screwtape’s words:

“The Enemy [God] wants to bring the man to a state of mind in which he could design the best cathedral in the world, and know it to be the best, and rejoice in the fact, without being any more (or less) or otherwise glad at having done it than he would be if it had been done by another.”

“The Enemy [God] wants him, in the end, to be so free from any bias in his own favour that he can rejoice in his own talents as frankly and gratefully as in his neighbour’s talents… He wants each man, in the long run, to be able to recognise all creatures (even himself) as glorious and excellent things…. (I)t is His long-term policy, I fear, to restore to them a new kind of self-love— a charity and gratitude for all selves, including their own; when they have really learned to love their neighbours as themselves, they will be allowed to love themselves as their neighbours.”

Humility is about recognizing our final purpose or, as the scholastics might say, our “end.”

The focus of humility—the reason that humility is a virtue—is God, and our relation to Him. It is about seeing who I am, and seeing who you are, in light of our Creator. What if we were happy about doing good without worrying about getting the credit?

What if we were excited for each other’s achievements to glorify God? What if we rejoiced at the cathedrals that our neighbors built?

If we do, then we are on our way to practicing humility.

That’s something in which we can take proper pride.