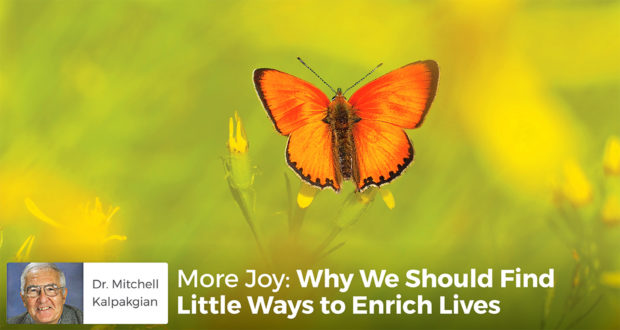 More Joy: Why We Should Find Little Ways to Enrich Lives

Man finds special meaning and purpose in inheriting and giving. Dr. Kalpakgian shows how we all have a small role to fill in creating more joy in the world.

All generations come and go like the grass in the field and the leaves of the trees, but man’s coming and going demands more than a mere passing from birth to death.

He receives and inherits from the wisdom of the past, from the love and devotion of ancestors and parents, from the traditions of ethnic cultures, and from the moral heritage of Christian civilization.

When man enters the world, he does not come into a family or society with no inheritance and begin his life impoverished or naked without some wardrobe to clothe, dignify, and protect him.

Something has been handed down or left behind for him that the word tradition signifies, a word with the Latin meaning of “to hand down” (tradere). A noble human life, however, not only receives and acquires legacies bestowed upon it but also preserves and perpetuates the best of the inheritance.

A person blessed with a rich patrimony must also live a moral, worthy life that also hands down something precious and invaluable to the next generation. This is the normal rhythm that continues the work of human culture and creates the blessings of civilization.

To inherit and to continue, to receive and to give, and to preserve and to perpetuate the fruits and gifts of the timeless, enduring ideals of the past gives special meaning and purpose to a human life.

In Robert Frost’s poem “A Tuft of Flowers,” a man arrives in a field to do a day’s work. He comes to rake a pasture mowed earlier by another man whom he does not know or see.

The solitary mower performed his task and left, and now the raker, also working alone, arrives to do his part: “I went to turn the grass once after one / Who mowed it in the dew before the sun.”

The raker enters the quiet scene and realizes the mower came and departed with no human contact, both men laboring in solitude: “‘As all must be,’ I said within my heart, / ‘Whether they work together or apart.’”

He thinks that a deep loneliness haunts the human condition and that all persons live as isolated individualists with little in common.

The work of a solitary man who comes and goes and does not interact or converse with another person appears perfunctory and impersonal. It gives the impression that men have no universal interests, no solidarity, and no human bond of friendship.

Just as the raker, detached and disconnected from others, realizes he is a lone figure in the field toiling to earn his livelihood, the flight of a butterfly seeking a flower invites his attention as it flies away and returns: “And once I marked his flight go round and round, / As where some flowers lay withering on the ground.”

Ready to begin the day’s labor, the raker pauses to notice the butterfly settling on a resting place: “But he turned first, and led my eye to look / At a tall tuft of flowers beside a brook.”

The scythe of the mower deliberately avoided the flowers. The simple beauty of the wild flowers adorning the pasture moved the man in the field to leave them unscathed. He spared the flowers because they were too lovely and delicate to cut:

The mower in the dew had loved them thus,
By leaving them to flourish, not for us,

Nor yet to draw one thought of ours to him,
But from sheer morning gladness at the brim.

The mower left something behind for others to share, to behold and enjoy as he did. He performed the deed anonymously and quietly because the good, the true, and the beautiful are intended for all people, and every person’s role in life is to contribute to this happiness and enrich the lives of others in some small or great way—to leave something behind.

The tuft of flowers attracted the butterfly that, in turn, directed the raker to discover the beautiful “message from the dawn” that moved him to feel “a kindred spirit to my own” and realize “I worked no more alone.” The act of simple goodness dispels the void of solitude.

When something great or small is handed down or left behind, the gesture is an exquisite human touch. Happiness is shared, beauty is offered, and friendship is felt.

All persons who live good lives have something valuable and precious to transmit, whether it is good example, great wisdom, family history, a love of God, cherished albums and antiques, or a favorite hobby or craft.

Each generation has much to offer to the next one, and life’s riches, both material and spiritual, need to pass from the old to the young and from person to person.

For this message from the dawn to assure all men that they play a part in the great drama of the family of man and to communicate that “Men work together . . . / Whether they work together or apart,” they must speak some universal tongue.

The Joy of Communion

Nature is one of those universal languages that unite all men familiar with morning, dew, flowers, bees, birds, brooks, pastures, and grass. Nature’s beauty, the handiwork of God, also speaks to all people in all times and in all places. Something as simple as the natural splendor of flowers creates human bonds that span generations and forms communion among all men.

The mower must do his part and, for the pure joy of it (“from sheer morning gladness at the brim”), recognize the beautiful in the natural and, in St. Paul’s words, sense the invisible things of God in the visible. The mower must remember that he is a human being before he is a worker and bring to his task his entire humanity, not merely his bodily strength or his skillful hand.

The raker must never separate the spiritual from the material or one person’s life from another’s. One can work and think, be on task and yet have wonder, do one’s work to the best of his ability and remember that it does not end when the day’s labor is finished.

The object of living and working is to hand something down and leave something behind, the fruits of the labor of love.

God who created Mother Nature to bloom with flowers sent the first message from the dawn through her. The mower received the news of this communication and could not contain this joyous knowledge because its richness was intended for all men. He left the flowers behind to flourish for others to see.

The glory of beauty, whether simple or sublime, evokes a love inspired to give and share and a wonder moved to spread the news about the truth of beauty and the goodness it announces.

The raker receives what God gave to Mother Nature to give to one man to give to other men so that all that is good, beautiful, and true continues to be perpetuated to reassure all generations that “Men work together.”