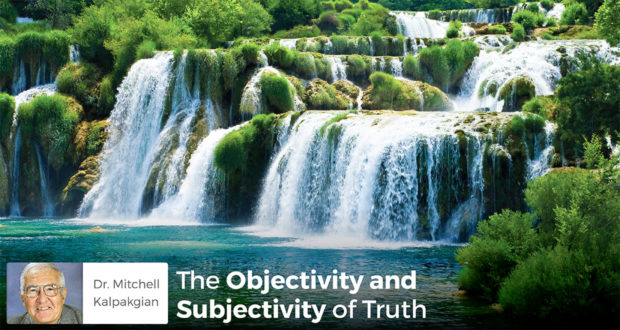 What role does the heart play in perceiving truth? Does sentiment make us biased? Dr Kalpakgian explores these questions through the works of C.S. Lewis

In a culture of moral relativism it is customary to hear that timeless ancient truths and traditional moral norms are “subjective,” that is, ruled by emotions, prejudices, and personal tastes that have no basis in reality. To use C.S. Lewis’s examples from The Abolition of Man, a modern thinker will claim that the statement “waterfalls are sublime” is a subjective reaction to the experience.

The sublimity is in the mind of the beholder, not inherent in the sight of the cascade of water. Likewise, the modern thinker will argue that the sentence “old men are venerable” also reveals subjectivity, a mere emotional response to the person rather than a true judgment of the nature of old age.

As Lewis argues, waterfalls are sublime, and the aged are venerable because these qualities inhere in their nature and are inseparable from their being. They are objectively present, not subjectively added or imagined by the beholder.

Lewis writes, “To call children delightful and old men venerable is not simply to record a psychological fact about our own parental or filial emotions at the moment, but to recognize a quality which demands a certain response from us whether we make it or not.”

These qualities of sublimity, venerability, and delight already exist. They dwell at the heart of created things as God-given, intrinsic qualities that define the nature of things as fixed, determined, and unchangeable—not traits painted or provided by the imagination activated by the emotions. The emotional response is natural, proportionate, and due to the object.

To pity someone suffering, to wonder at the beauty of creation, to be touched by an act of love are the natural reactions that these experiences evoke or “demand” as Lewis says.

To feel nothing at a waterfall, to ignore the venerability of the aged, or to be unaware of the charm of the child shows an absence of humanity and an insensibility to the good, the true, and the beautiful that resides in the structure of reality in the nature of things.

Lewis uses the term “stock responses” to describe this essential aspect of human nature that is universal. Examining the sacred writings and great thinkers of older cultures, Lewis identifies these stock responses as intrinsic to the human race in all times, in all places, and in all cultures.

For example, “Nature produces a special love of offspring” (Roman), “The Master said, Respect the young” (Chinese), “Children, the old, the poor . . . should be considered the lords of the atmosphere” (Hindu).

These are not subjective reactions that have no basis in truth or reason. The stock response to suffering evokes the same universal feelings of kindness, compassion, and mercy.

Lewis again cites examples from all parts of the world and different religious traditions: “I have given bread to the hungry, water to the thirsty, clothes to the naked, a ferry boat to the boatless” (Egyptian); “They said he had been the mildest and gentlest of the kings of the world” (Anglo-Saxon); “You will see them take care of . . . widows, orphans, and old men, never reproaching them” (Native American).  Subjectivity, then, is not the opposite of objectivity as modern thinkers claim.

The knowledge of the five senses and the sentiments of the heart provide real human knowledge and communicate truth.

The head alone is not the source of all knowledge. Without these stock responses, man lowers himself, in Lewis’s phrase, to “a trousered ape” or “Men without Chests”—a being missing a vital part of his human nature:

“The head rules the belly through the chest—the seat, as Alanus tells us, of Magnanimity, of emotions organized by trained habit into stable sentiments. The Chest—Magnanimity—Sentiment—these are the indispensable liaison officers between cerebral man and visceral man.”

Man can know, sense, and feel the truth that he receives from the mind, the heart, and the emotions. Thus the rejection of moral sentiments as unreliable subjective feelings violates the integrity of human nature by associating the head with real objective knowledge and the emotional responses with unreliable information.

Modernity presumes to view human beings as persons without hearts. When people recoil at the shocking evil of men and women killing their own flesh and blood in abortion, they are accused of being subjective and lacking objective knowledge about the beginning of life.

When they wince at the idea of same-sex “marriages,” their reactions are classified as “homophobic,” irrational, and ungrounded in the reality of equality under the law. When they revolt at the thought of men and women redefining their biological sex, they are labeled as illiberal, bigoted and narrow-minded. Modernity forbids, suppresses, penalizes the natural stock responses of human nature and calls them “hate crime.”

In Lewis’s That Hideous Strength Professor Frost, one of the members of The National Institute of Coordinated Experiments (N.I.C.E.)—an elite circle of intellectuals who envision a utopian future engineered by scientific “objectivity”—subjects Mark Studdock, one of the new initiates, into a form of psychological conditioning they call “objectivity training,” the attempt to convince him that the words “good” and “bad” are merely “the expression of emotion.”

Traditional moral virtues like patriotism or duty “were mere products of the animal organism,” not the dictates of conscience or reason. To Professor Frost, all self-evident moral truths like the statement “children are delightful” are merely the products of emotion produced by chemicals.

To eliminate emotions, then, in the name of objectivity also rids human thought of “an external standard of value which the emotion produced.”

Studdock is placed in a room to retrain his human sensibilities so he is not shocked by abnormal sights like “a man with corkscrews instead of arms, a giant mantis playing a fiddle eaten by another mantis,” or a door with the arch not in the center.

He soon realizes that “to sit in the room was the first step toward what Frost called objectivity—the process whereby all specifically human reactions were killed in a man so that he might become fit for the fastidious society of the Macrobes.”

During this training Studdock resists the indoctrination inflicted upon him by noting the irregularities of the room, the strange pictures, the grotesque sights, and the absence of normal order:

“As the desert teaches men to love water, or as absence first reveals affection, there rose up against the background of the sour and the crooked some kind of vision of the sweet and the straight. Something else—something he vaguely called the ‘Normal’—apparently existed.”

In other words, Studdock finally learns to trust his stock responses, his natural reactions to the beauty of order and design that reveal a rational universe and natural law. Nature will out. The heart speaks. The conscience utters truth.

Good and evil, right and wrong, beauty and ugliness, normal and abnormal, and male and female never change their definitions and meanings. All these attempts at verbal engineering only result in what Lewis calls “the abolition of man”—the erosion of all the logical distinctions that provide meaning, intelligibility, and natural and moral order to human existence.

As Lewis explains in The Abolition of Man, “It is the doctrine of objective value, the belief that certain attitudes are really true, and others really false.”

If waterfalls are not sublime, if the aged are not venerable, and children are not delightful, then all self-evident truths lose their validity, and all that remains is “propaganda.”