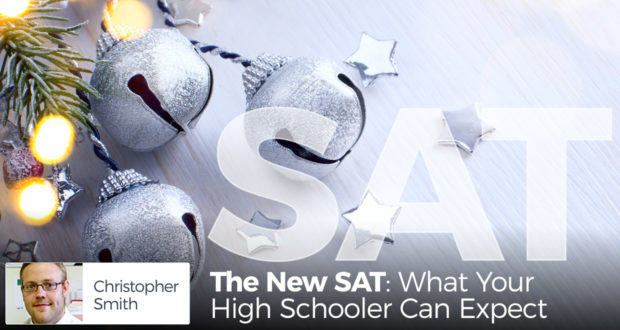 The New SAT: What Your High Schooler Can Expect

Editor’s Note: This article on was originally written for the print edition of Seton Magazine, but we believe that its insights are valuable to anyone taking the new SAT.

We have received multiple inquiries over the last few months about the new SAT format that will be launching next year.

Mr. Wiesner wrote about the new test some months back, but given the amount of concern and interest the test is generating, it’s worth taking a second look.

Let me say that your concerns are valid, given the growing importance of standardized testing in the college application process.

The new SAT will be launched in March of 2016. This means that seniors applying to college this year will not really be affected, as most college applications are due before that date.

Those of you seniors who still haven’t taken the SAT, I would recommend you take it before the launch of the new test, as it is most likely you have studied for the old format.

For the most part, it’ll be current juniors and sophomores who get to conquer this brave new frontier.

In the past, the SAT ostensibly was used to test a student’s innate abilities, while the ACT tested what students had already learned in high school. The architects of the new SAT want it to function more like the ACT, and thus the sections are now constructed to assess students in more specific concepts that will be necessary to succeed in college and the modern workplace.

Whether or not the new test will meet that goal is a huge question indeed, and I would not be surprised if there is a lot of tinkering with these concepts in the future.

One thing we do know for certain is that there will be an increased focus on reading and analysis of passages, even in the Math section. This is where some of the Common Core ideas have seeped in and taken hold of the hearts and minds of our friendly test architects.

From what I have seen in practice tests, I believe that our students will be more than able to hold their own with this change in focus, though again, I would not be surprised to find some biases reflected in these passages.

It is not new for the SAT to have questionable and/or objectionable material that the students must analyze, but we should all be prepared for that to increase.

A Change in Vocabulary

Another “interesting” change is that students will not be tested on vocabulary in the traditional sense. I remember in my own SAT days sitting up late into the evening, flipping through well-worn flashcards with my papercut-laced hands stinging from the salty tears flowing out of my weak and tired eyes.

These character building exercises will be a thing of the past. Instead of focusing on analogies and antonyms, students will look at words in a more contextual way, such as determining what a certain word in a passage “most nearly means.”

I think our students will also be at an advantage here and that this change will make things a bit easier across the board—not better, necessarily, but easier.

More Objective Analysis on the Essay

The infamous essay section will no longer be mandatory, just like the ACT, but students will be encouraged by colleges to take this portion of the test, at least in the beginning. The stated hope is that the section will be based on more objective analysis.

For the immediate future, I would recommend that students check with their schools of interest, and find out if those colleges require the essay or not. Seton students have done well on this section since its inception, so I don’t expect that to change.

The Mathematics section will see multiple changes in focus and content. As mentioned, there will be a greater focus on word problems, and extrapolating data from passages. Polynomial Algebra will be a strong point of emphasis, as well as data and statistics, and Advanced Math concepts such as Trigonometry.

Although Geometry will not be as heavily tested per se, it is still a foundational Math and is heavily used in Trigonometry and even Algebra 2.

Certain sections will allow the use of calculators, while others will not. The changes to the Math section are more substantial than those to the other sections, but again, I believe that the analytical skills our students practice not only in Math, but in all aspects of the Seton curriculum, will serve them well.

The new SAT Math section is more aligned to what the ACT has been testing, and our students have not seen a drop-off in their ACT scores as compared to the old SAT math section.

With all of these changes, we will be keeping a close eye on any developments. I would be happy for any feedback that you and your families have on the new test, so that we can continue to develop strategies for our students to excel and get into the schools of their choice.

Seton students are getting a world-class education, and I am confident that will continue to be reflected in their test scores.

Christopher Smith is the Director of Guidance at Seton. He has an M.A. in National Security and Statecraft from the Institute of World Politics in Washington D.C. He received a B.A. in Philosophy from Christendom College and is currently working on an M.S. in Education from Franciscan University.
chris chris-smith christopher high school sat smith 2015-12-09
Seton Home Study School