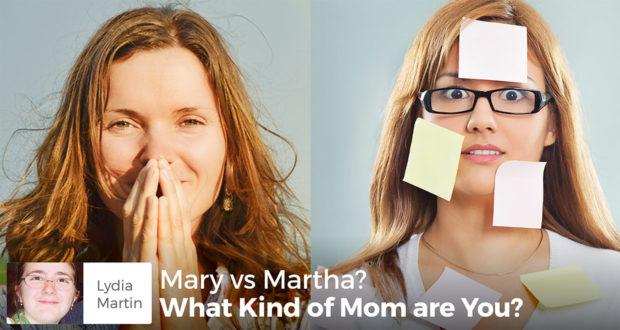 Mary vs Martha? What Kind of Mom are You?

Many moms feel guilty when they read the ‘Mary and Martha’ story. Seton alumna, Lydia Martin, explains why they shouldn’t.

To all you Martha-like moms out there:

You are anxious and worried about too many things, aren’t you? Do you remember that one reading that always reminds you what a terrible person you are and how you aren’t doing enough?

You are sitting in church one Sunday morning, or worse, you hurry in five minutes after Mass starts after praying desperately to the guardian angels that Father will be late this morning (and that your husband won’t get a ticket).

You are late because Susie didn’t get into the shower until three minutes before you were supposed to leave, and baby Bobby spit up all over you as you were herding the others out the door. Your hair is falling down, you forgot your makeup, there are dark circles under your eyes, you just stepped on a Cheerio when you stood up for the Gospel… and it’s that reading.

“‘Lord, do you not care that my sister has left me to do the serving? Tell her to help me.’

‘Martha, Martha, you are anxious and worried about so many things. Only one thing is necessary. Mary has chosen the better part, and it will not be taken from her.’” (Luke: 40-42)

Clearly, like Martha, you are a terrible person. You instantly resolve to go to daily Mass, to never yell at your children again, and to get up half an hour earlier so you can read the Bible in peace and quiet before those little hooligans- excuse me, I mean those merely misunderstood, sweet, cherubic children, wake up and require sustenance. You are glad Susie wants to be a nun. She will be so holy and make up for you a little bit.

Yet, perhaps, just perhaps, a little, rebellious part of you sides with Martha and says, “If Jesus were coming to my house, I would probably make dinner for Him, and He would be annoyed with me. But someone has to make the dinner. Who’s going to make dinner while Martha joins Mary on the floor at Jesus’ feet?” It’s a rebellious, bitter thought.

Yes, clearly you are a terrible person.

What did Jesus really mean?

I know a priest (God bless him) who always explains this reading as if Martha did just drop the spoon she was wagging and sit down beside her sister, leaving the dinner to burn.

I know he is trying to emphasize the need for meditation and quiet prayer time, but he never addresses what Jesus ate after scolding Martha for being overwhelmed with work. I’m planning on being a nun myself, so I suppose I don’t have much right to complain, except that I think my mom is awesome, and this reading seems to make her just feel terrible sometimes.

Daily Mass is awesome. Not yelling at your kids is good. Reading the Bible is important. But someone does have to make dinner. Was Jesus really scolding Martha for being busy? Why is Mary “better”? Is Susie better than you, or am I better than my mom? (Susie’s behavior might possibly have a real-life model…)

Martha was not too busy

How do I know that Martha was not too busy? Didn’t Jesus just say she was too busy and worried about too many things? Isn’t Mary better because she’s not busy?

We can know that Martha wasn’t too busy, and in fact that she kept right on doing what she was doing, because the story doesn’t end there.

The reading does, but in a little while, in the Gospel of John, you will meet these sisters again. This is where I respectfully quibble with the aforementioned priestly interpretation because they’re doing the exact same characteristic Mary/Martha things. Martha is running all over the place, while Mary sits around.

Notice though, how because Martha is running around, she hears that Jesus is coming? And she does exactly what she did last time. She runs to Jesus and starts complaining, “Lord, if you had been here, my brother would not have died” (John 11:21). Only this time Jesus doesn’t rebuke her for worrying.

A complaint in the right spirit

This is a typical Martha response, but it is not therefore a wrong one. Notice how the contemplative Mary, when she comes to Jesus, says the exact same thing Martha said: “Lord, if you had been here, my brother would not have died” (John 11:32).

Only Mary is missing the second half of Martha’s statement: “And even now I believe that whatever you ask of God, God will give you” (John 11:22). It is probably true that Jesus’s words totally changed Martha’s life and cured her fault, but the fault was not in her activity. Martha has the active vocation, and she and Mary arrive at the exact same conclusion about their problems by running to Jesus.

Martha is just as much a saint as Mary is. Martha is the one who makes the sublime profession of faith in Jesus: “Yes, Lord; I believe that you are the Christ, the Son of God, he who is coming into the world” (John 11:27), and it is she who prompts Him to say, “I am the Resurrection and the Life” (John 11:25).
Mary is not better, but she has a higher calling

Mary is not better. The part she has chosen is better. It is intrinsically a higher calling to sit at Jesus’ feet, because it is a supernatural, rather than a natural, calling. Mary is one of the first contemplatives; she sits in the cloister of Jesus’s voice and Jesus’s smile, while Martha runs about in the world of the kitchen and market, and seeks Jesus on the open highway rather than the private room.

If you are feeling jealous again and a little hurt by Mary’s peace, Susie’s calling, and your inability to do what they are called to, think again. It is the part, not the person, which is higher. Mountains are higher than hills. Stars are higher than nightlights. Angels are higher than men. The contemplative vocation of Mary is “better” only because it is of a different order and belongs by its nature to the supernatural.

But so did Jesus. Jesus is the Second Person of the Blessed Trinity, God from God, Light from Light, consubstantial with the Father. He is most emphatically of a higher nature than we are.

Only one thing is necessary

Jesus never tells Martha that “much serving” is a bad thing. In fact, we have already seen how Martha remains active, and how Jesus comes among us as “one who serves” Luke 22:27). What Jesus doesn’t like about Martha’s behavior is her complaint about Mary. It’s not that she is active, but that she thinks Mary should be active too. If you’re thinking that the contemplative vocation is wonderful, and you want your daughter to be a nun, you’re not doing the exact same thing Martha does.

You’re not trying to wreck Mary’s contemplation, but you are making the same mistake by judging one vocation as worth less because it is of a lower order. You are probably also judging yourself as worth less (even if not completely worthless) because of your active life.

But that is the same mistake that Martha made, only turned inside out. Instead of wronging someone else by misjudging his worth, you wrong yourself. And how are you going to love others as yourself if you don’t love yourself?

Forget that nagging fear that Jesus doesn’t care that you have been left to do the serving. You are worth so much doing exactly what God wants you to do. You are where He wants you to be. All you have to do is love the least of these, and He is right there serving with you.

One may reach the supernatural end through whatever path God chooses. Mothers pray through their work, the old monastic “ora et labora” in the world. They care for the “least of these” (Matt 25:40). They serve others. Remember that Christ says, “The greatest among you will be your servant” (23:11).

My dear “Martha-like” mothers, God loves you very much, every bit as much as He loves Mary of Bethany or St. Teresa of Avila.

Your worth is not dependent on the glamor of your work.

Your worth is dependent on the love of God and the degree to which you return that love.

Lydia Martin is a recent graduate of Seton. She is the fourth of seven children, and lives with her parents in Royse City, Texas. She is a bookworm, loves to cook (sometimes while reading) when she isn't writing, and has an ambition to become not only a writer, but a novelist. She is considering joining the Dominicans of St. Cecelia in Nashville.
anxious belief busy Jesus lydia lydia-martin Martha martin mary magdalen mass prayer prayer time vocation worry 2016-06-16
Contributing Writers