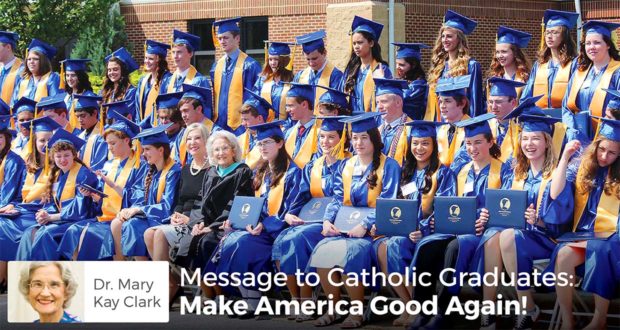 So this graduation day is a time to be happy and grateful.

This Memorial Day Weekend is also a time to thank God that we live in a country in which we can celebrate our family and our Catholic Faith at an event like this in a public building. Not every country has this luxury. We do because brave young American men and women love liberty and have sacrificed for it. 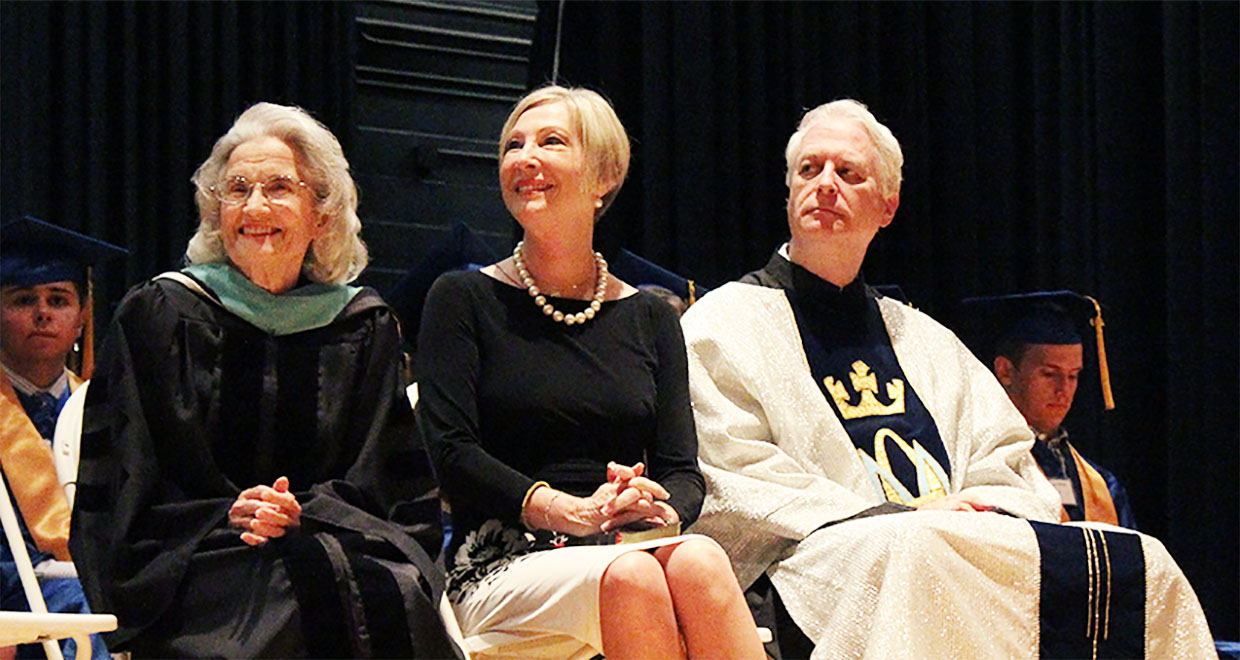 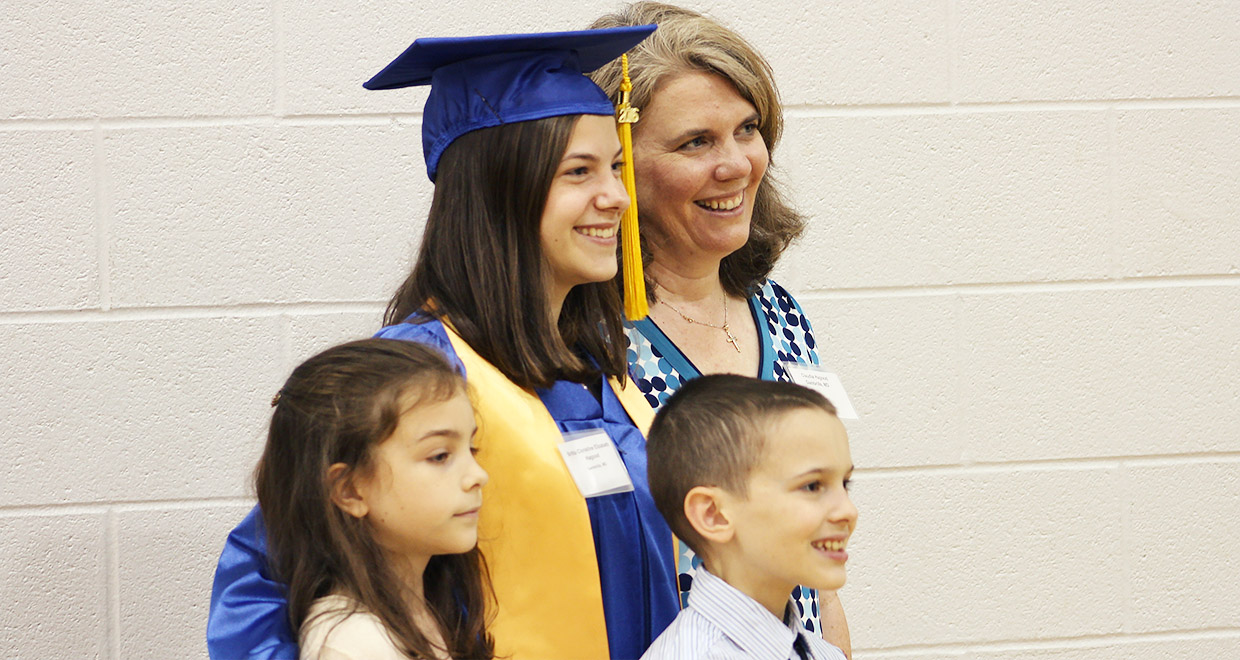 Our country needs good Catholic leaders at every level of American government. There is no better group of young men and women to determine the future of America as a good nation, than you Catholic graduates. Your Catholic education gives you the tools to meet the demands of public office, to help others to seek the common good, to serve America and Americans well.

There is a wonderful, homeschooled saint we should ask for intercession to help our country to return to good Catholic values. Her family’s nickname for her was Jennette.

By all accounts, Jennette’s early life was very ordinary. One day at about 13 years old, she starting hearing voices from Heaven. From that moment, her life never stopped being amazing.

Saint Michael the Archangel recruited her for a mission to save her country by fighting in battle. Jennette objected with a very reasonable response: “I am a poor girl; I do not know how to fight.”

But the heavenly voice responded by saying:

“It is GOD who commands it.”

Immediately, Jennette stepped forward to obey the call from God. At the age of seventeen, she was appointed Supreme Commander of her nation’s military!

Her sword was not her trusted companion in battle. In fact, Jennette never used it. Instead, she carried a banner into battle. It bore several images: it depicted God in the Heavens, the Annunciation, and the Crucifixion. Jennette said:

“My banner I love forty times as much as my sword!”

Miraculously, Jennette and her faithful soldiers drove the enemy away in a conflict that has mystified historians and generals ever since. In human terms, it was impossible for her to win. But nothing is impossible with God. Jennette saved her Catholic nation. And thus she changed the world.

But her victory came at a terrible cost. Jennette was captured by traitors, and then prosecuted in an enemy court that amounted to a show trial. To the eternal shame of her prosecutors, she was illegally sentenced to death.

One author wrote the following about her:

“She was honorable in an age which had forgotten what honor was. She was a rock of convictions in a time when men believed in nothing. She was of a dauntless courage when hope and courage had perished. She was spotlessly pure, in mind and body when society in the highest places was foul in both.”

That biographer was Mark Twain. And though her family affectionately called her Jennette, history remembers her as Saint Joan of Arc. This Monday is not only Memorial Day, it is the feast of St. Joan of Arc. 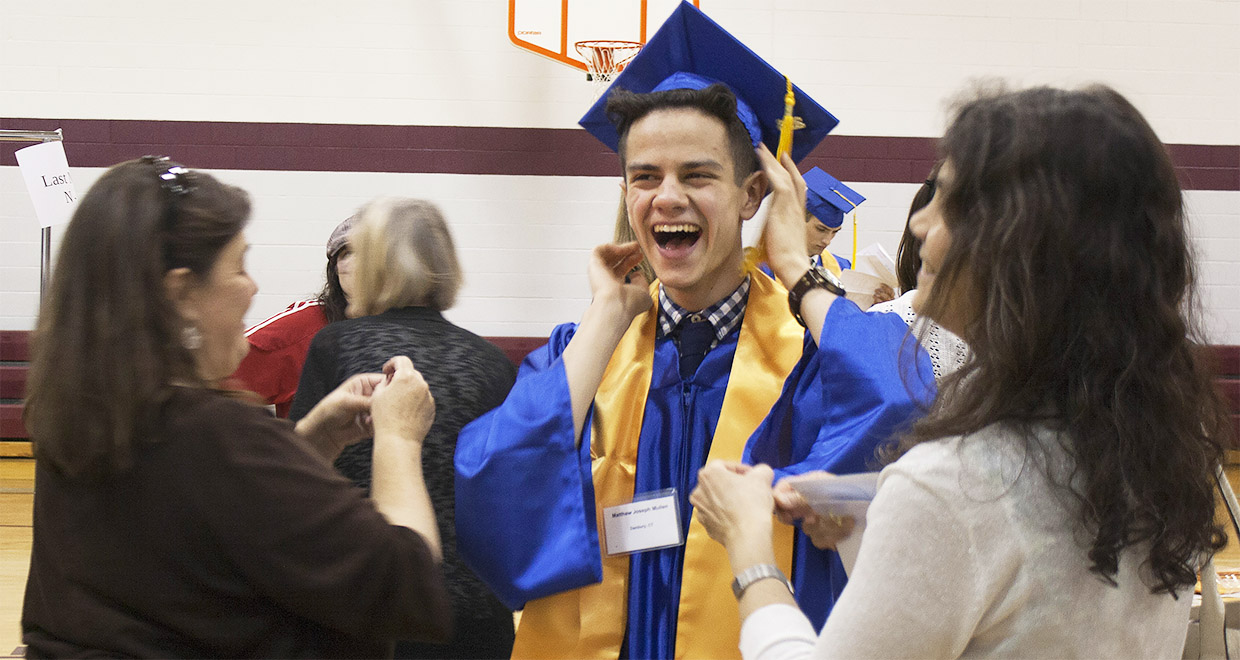 As we pray for our American heroes on Memorial Day, we need to ask St. Joan of Arc to pray for our nation because many people have forgotten that true patriotism means desiring the good—the true good— for our country.

Many of our leaders seem to have forgotten that truth and justice and goodness are the American way. Graduates, America’s greatness has always sprung from America’s goodness.

Our America is sick and suffering, and seems to have lost its way. To find her way back, she needs young men and women and families to rise up, like Saint Joan of Arc, with prayer, with heart and soul and mind and strength.

Are you graduates, parents, and families ready and willing to carry that Catholic banner of Faith?

Graduates, parents, and families, our Catholic mission is simple:

We Must Make America Good Again!

Quotes from our graduates

I cannot wait to get out there and move forward with my life, super excited for the college courses I’ll be taking next year!”  – Paige M.

“My favorite thing about graduation was finally getting to meet in person all of the wonderful people I knew from Seton’s online forums. The friendships that I have made through Seton have been unforgettable!” – Emily C. 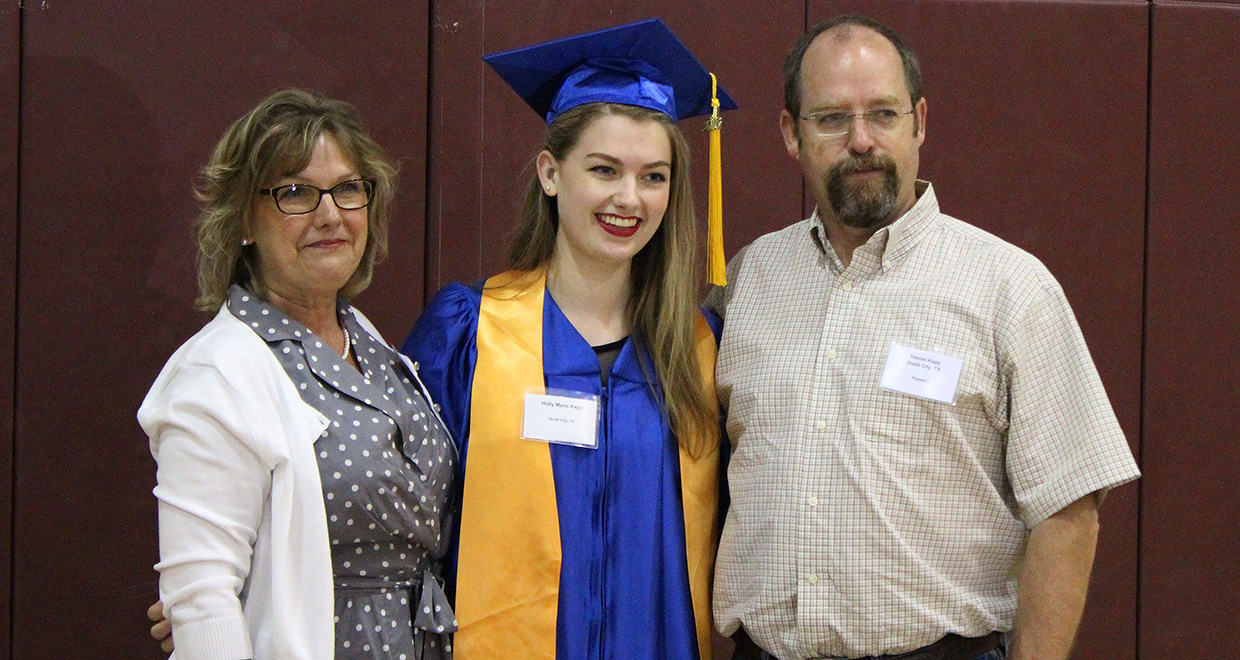 “I am preparing to attend college in the fall. I’m excited about starting my college life and starting my career as a pilot. – Stephen L.

As a twelve year Seton Home Study School Alumni, I became accustomed to my demanding work schedule. I know that I’ve been well prepared, no matter what happens in the future. I am looking forward to my next adventure, DeSales University, ready to charge forward toward the bright light of my future.”   – Bobby M.

My favorite thing about graduating this year was being able to see a girl I had met through the Seton Message Boards in real life.  We have been talking for two years and she has become one of my best friends! – Sarah C. 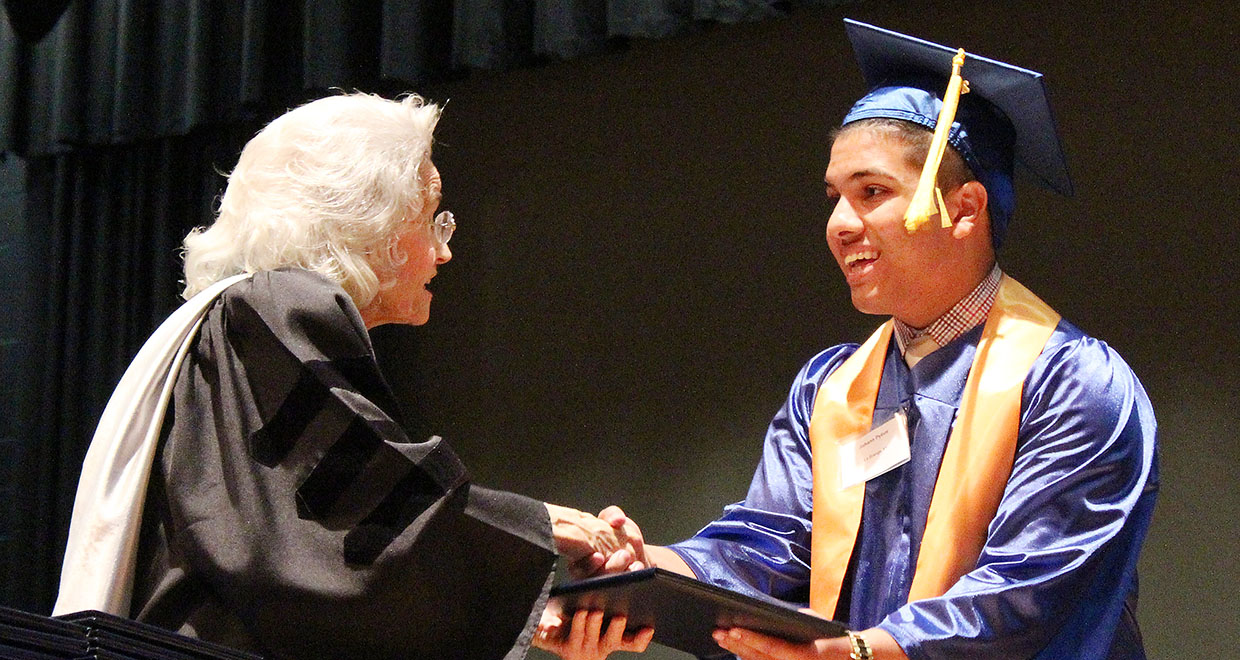 My favorite thing about graduating this year is that 2016 has been proclaimed a Jubilee Year of Mercy.  I’m excited to start a new phase of my life, especially since I know that my Seton education has well prepared me for whatever lies ahead! – Kate C.

I would like to say THANK YOU, SETON! I know I could not have received a 29 on the ACT or so many academic scholarships without your fantastic staff and curriculum!!! – Donna Jo C. 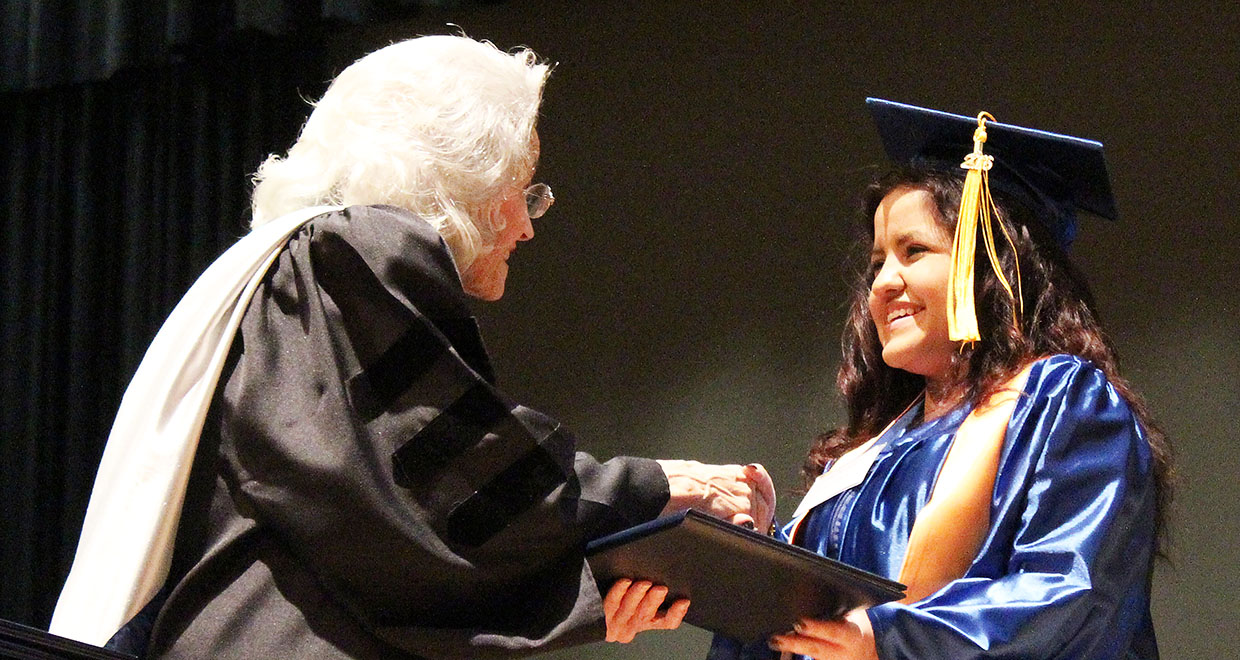 I am a Seton graduate in the class of 2016 and my favorite thing about graduating this year as opposed to other years is that, unlike my other two sisters, I am the first kid in my family to graduate in an even-numbered year (my older sisters were Seton grads in 2011 and 2013)! What excites me most about graduating is having a wider window of opportunity to pursue my interests and deepen my spiritual life while attending the University of Portland this upcoming fall.  – Marie V.

Now, having graduated from Seton I feel confident and knowledgeable enough about my Catholic faith, to be able to persevere in all of my future endeavors. – Ashlynn F. 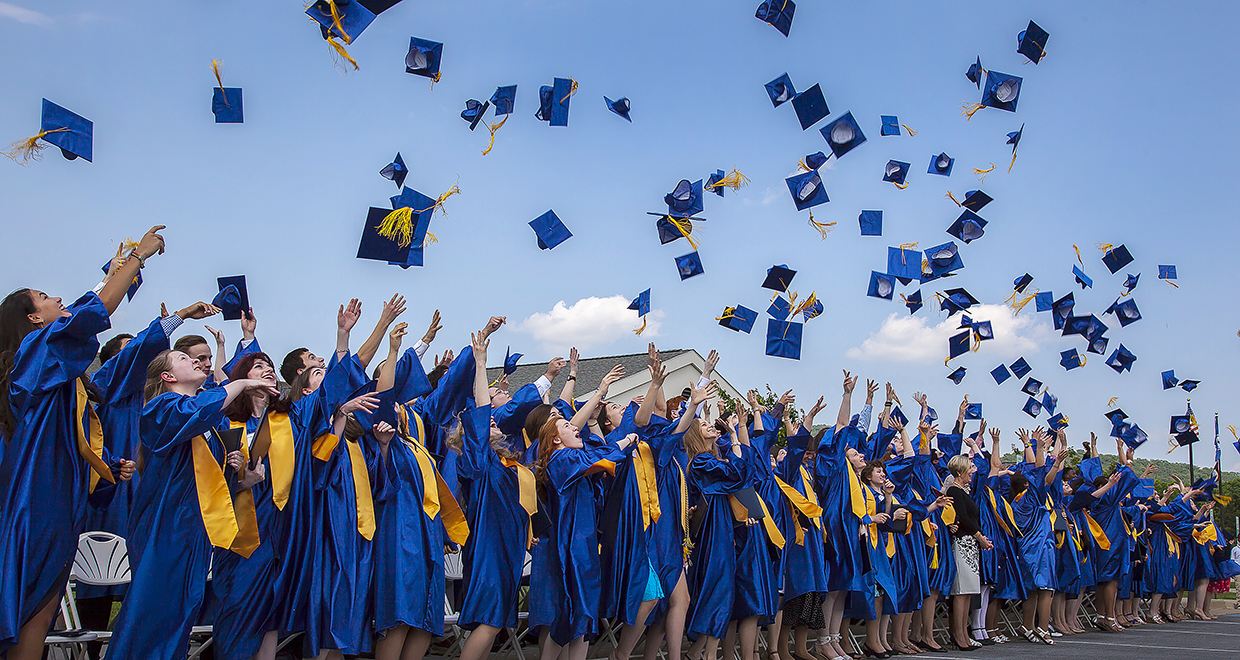