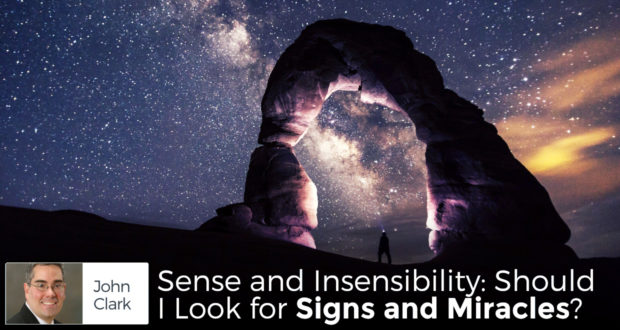 Sense and Insensibility: Should I Look for Signs and Miracles?

I thought a long time about whether to run this blog. But I think it’s time.

Last year, I had been having a difficult time with various things: the professional transitions that life kept sending me, questions about my spiritual life, and second-guessing many of my decisions. I wanted God’s reassurance that I was on the right track.

Specifically, I wanted a sign. However, in diametric contrast to my wife, I have never been a sign type of person.

Not that I don’t like signs, but a certain Scriptural verse kept going through my head: “An adulterous generation looks for signs and wonders.” Over the years, that has kept me from asking.

So as I knelt in church thinking about these things last year, I dared not ask.

Yet, I kept thinking about asking God for a shooting star. In fact, I never considered asking for any other type of sign. But I kept thinking: Is it only the adulterous that ask for signs?

My wife had an answer.

She explained to me that I had been reading this passage wrong. It didn’t mean that faithful Christians shouldn’t look for signs and wonders; it meant that the unfaithful would see signs, but would just disregard them.

Armed with that knowledge, in perhaps the most informal prayer of my life, I asked God to send me a shooting star. And after that moment, I almost forgot my request.

Until about twenty-four hours later.

On the night following my prayer, I saw it: a majestically bright, dazzling, green falling star. I had never seen anything like it before. I had asked for a shooting star, but God sent me a much rarer occurrence: a falling star.

As I discovered, few things light up a night sky like a falling star. And sometimes, the sky isn’t the only thing that is brightened.

Since that event, I have wanted to write about it. Insofar as my columns amount to a series of periodic updates in the diary of an average Catholic father, this event certainly merits an entry. But I have been reluctant to write about it.

Why? Because I didn’t want to give mockers of Christianity one more chance for mockery.

We live in an age in which people of faith are considered morons, and any suggestion of a miracle by them is seen as damning evidence of that charge. No amount of factual data can exculpate them from the crime of stupidity.

Even we Catholics can sometimes try to explain away the hard-to-explain incidents of our fellow brothers and sisters. Ironically, even many of us Catholics have grown uncomfortable or embarrassed with the idea of miracles. After all, we can never be exactly sure of them.

C. S. Lewis writes about this in Miracles, commenting:

“For this reason, the question whether miracles occur can never be answered simply by experience. Every event which might claim to be a miracle is, in the last resort, something presented to our senses, something seen, heard, touched, smelled or tasted. And our senses are not infallible. If anything extraordinary seems to have happened, we can always say that we have been the victims of an illusion. If we hold a philosophy which excludes the supernatural, this is what we always shall say.” (Emphasis mine.)

Lewis is right. The gentle breeze of a miracle offers no evidence to a soul insistently standing in an unrelenting tempest of disbelief.

Yet, God does not stop working miracles because they might offend the sensibilities of Christians or the insensibilities of atheists. Why not write about it? Demons and doubts will continue their work whatever I write. But so will miracles; so will faith.

In truth, miracles don’t replace faith; they still require it. Doubts follow miracles. I had my own, such as: “Did I really pray for it, or just consider praying for it?” and “Does does a falling star count? After all, I asked for a shooting star.”

Was it a miracle or not? I guess that depends on one’s point of view. But either way: I saw a falling star that night.

Even if one insists on pure coincidence and random chance, does that negate the possibility that God had something to tell me? Moreover, isn’t God the Author of what we call “random” as well as nonrandom?

Yes, there are ways to explain things away as something other than miracles. For the past two thousand years, we seem to have perfected that ability.

Maybe that’s why nine lepers never returned. Maybe they thought that they hadn’t been too sick after all.

Perhaps as Catholics it’s time we take some encouragement from one who did recognize the intervention of God. Two thousand years ago, though he had been unable to ever see one, he was able to see stars for the first time in his life—shooting, falling, or otherwise.

He is remembered to us as The Man Born Blind. He had an explanation as to how he could see, but no one seemed happy with that explanation other than the man himself. Others kept insisting that what happened could not have been a miracle.

But the man offered the simplest of observations about what had occurred: “One thing I do know. I was blind but now I see!”