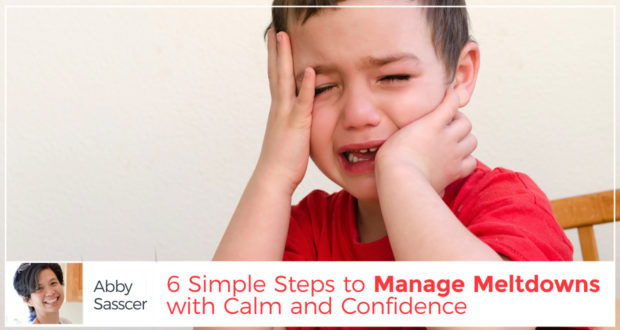 6 Simple Steps to Manage Meltdowns with Calm and Confidence

Tantrums and meltdowns seem to be quite a common reaction in many of our young children.

But while we tend to identify tantrums with an image of a screaming child flailing wildly, one of the things I learned during behavior modification training is that the quiet insubordination of older children can also be considered a “tantrum.”

One of the main goals of behavior modification science is not just the systematic eradication of specific unfavorable behaviors, but also the replacement of more acceptable ways to communicate and behave in the future.

These are just and noble goals, but we, as Catholics, believe that we are more than beings defined by our behaviors. We are human beings made in the image and likeness of our Heavenly Father Himself.

Consequently, it is essential to teach our children good behavior in a respectful manner that honors the dignity Our Lord has bestowed upon them and that allows it to remain intact.

One of the most beautiful lessons I learned during behavior modification training is to treat children with much dignity and respect. It taught me the virtue of patience… a virtue I so longed for and that seemed to have eluded me during the early years of my parenting adventure.

Working with children with special needs blessed me with the opportunity to learn different tools and systematic techniques for staying calm and modeling good behavior myself, regardless of my own children’s emotional responses and reactions.

So how do we teach our children in a respectful and dignified manner while they are having a meltdown or a tantrum?

Below are six simple steps:

The term “cycling in” means reacting negatively to your children’s emotions or behaviors. Cycling in is simply a reaction to a reaction and is extremely unproductive.

Remember that your role as a parent is precisely not to react negatively right away, but rather to model good behavior as much as possible.

Just imagine your child huffing and puffing on a stationary bike. He’s upset. He’s angry. He’s on an emotional roller coaster ride and doesn’t seem to know how to stop. Be aware that your job is to help your child calm down.

Don’t try to hop on the stationary bike with him. It simply won’t go anywhere.

Once you’ve made a conscious effort to remain calm, gently remove the child from the situation by taking him or her to another room. If that is not possible, you can politely ask everyone around you to leave. This will ensure that your child does not begin to hurt himself or hurt others around him.

A change in environment may also help to cut the behavior short.

Additionally, removing an audience will help you remain calm, and it will relieve the pressure of wanting to immediately react to your child’s behavior simply because other people are watching.

3. Help Your Child Calm Down

It is absolutely essential to help your child calm down because:

A child needs to be calm before you can teach him or her anything. The sooner the child calms down, the easier it is for you to go through the 5W’s later.

In a majority of cases, a child gets into a long tantrum or meltdown, not because he wants to make our lives difficult, but because he is feeling so emotional, he simply doesn’t know how to stop.

Ignoring the child will not help him or her to calm down. In fact, it will only escalate his or her tantrum.

How do we ignore excessively emotional behavior? By choosing to remain calm and not cycling in.

How do we help the child to calm down? By saying calming statements such as:

If your child is too young and doesn’t yet fully understand words, a simple, constant and quiet hushing can help calm the child significantly.

4. Give the Child Two Choices

How do we know that a child is calm enough and ready to be taught?

A very effective way to know is to offer the child two choices. During behavior modification training, this is called a “compliance task.”

Offering two choices gives the child a semblance of control over what seems to have been an out-of-control situation. You can calmly say something like:

If the child makes a choice and complies, then you are ready for the next step.

If the child starts getting upset again, repeat Steps 3 and 4 until he or she is able to fulfill the compliance task.

Go through the Five W’s as mentioned in my post, 5 Steps to Turn a Temper Tantrum into a Teaching Moment.

Feel free to go through the 5W’s in conversation form. However, if your child has a difficult time expressing himself in words, you can sit down and answer the 5W’s with him in paper form, where either the parent or the child can write or draw the responses. 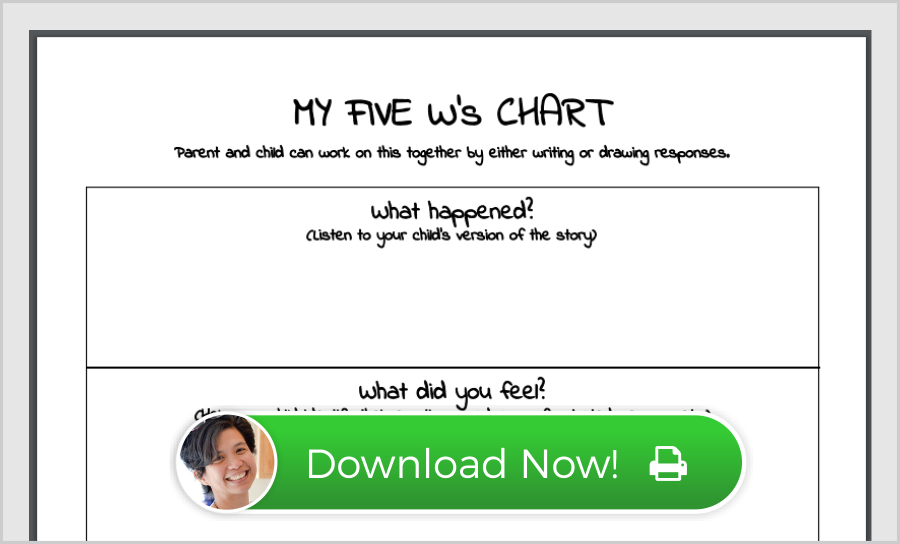 Once a child chooses what he can do instead of having a tantrum, feel free to role-play this scenario up to three times.

I highly recommend having a small binder within reach where parents can store Acceptable Behaviors Lists and plenty of copies of the 5W’s worksheet. In this way, those sheets will be handy when needed.

And while it seems that these steps may take a long time, it really only takes between five to ten minutes from the time the child calms down. Thus, you can turn a seemingly stressful situation into a very productive, positive and powerful teaching moment!

Parents’ Prayer for Their Children

O God the Father of mankind, who hast given unto me these my children, and committed them to my charge to bring them up for Thee, and to prepare them for eternal life: help me with Thy heavenly grace, that I may be able to fulfill this most sacred duty and stewardship.

Teach me both what to give and what to withhold; when to reprove and when to forbear; make me to be gentle, yet firm; considerate and watchful; and deliver me equally from the weakness of indulgence, and the excess of severity; and grant that, both by word and example, I may be careful to lead them in the ways of wisdom and true piety, so that at last I may, with them, be admitted to the unspeakable joys of our true home in heaven, in the company of the blessed Angels and Saints. Amen.

(from The Golden Manual, published by Burns and Lambert, London, 1850)