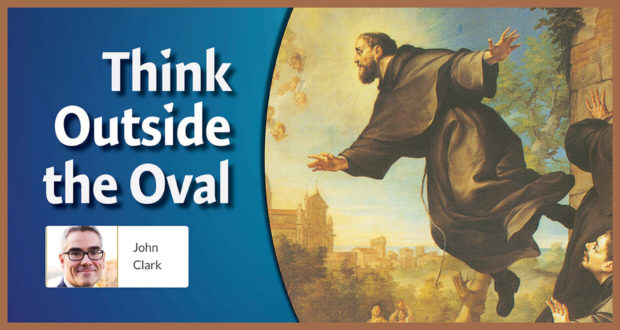 Think Outside the Oval

John Clark shares his insight on multiple-choice tests, holy, albeit academically-challenged saints, and what it all has to do with our journey toward God.

Many of you students reading this are preparing to take your SAT, ACT, or CLT College Entrance exams—and some of you are panicking about the prospect. As a homeschooling father, I’d like to pass on a tip I give my own kids: Do not—DO NOT—judge yourself by the grade you receive.

To stress the lesson, and to hopefully de-stress you, please keep in mind two points.

But they have become the Final Judgment of the academic world—as though scores precisely indicate a person’s intelligence. Nonsense. Some of the most brilliant people I know have received lousy SAT scores.

They have also been some of the most creative.

The Fallacy of Multiple-Choice Tests

Socrates, the teacher who raised questions to the level of an art form, would have detested multiple-choice entrance exams.

Had Socrates seen our current education system, he might have made a similar observation to this one penned by playwright David Mamet: “Society functions in a way much more interesting than that multiple-choice pattern we have been rewarded for succeeding at in school. Success in life comes not from the ability to choose between the four presented answers, but from the rather more difficult and painfully acquired ability to formulate the questions.”

Second, academics isn’t all it’s cracked up to be, either.

Saint Bernadette was illiterate. It was said that her only “prayer book” was a rosary. Toward the end of her life, she was asked about what her education had been like when she was growing up. She responded, “I scarcely ever went to the school, and when I did, I learnt nothing.”

Saint Joan of Arc couldn’t read or write. Yet she outwitted every false accuser she ever had—and there were many. If the best military commanders are those who possess purity of action, unshakable belief in purpose, and devotion to a great cause, Joan ranks second only to Michael the Archangel—with whom she forged an alliance of friendship.

Saint Joseph of Cupertino was such a poor and clumsy student that religious orders competed against each other to not accept him. In the Church’s sense of humor, Joseph is the patron saint of test-takers. And it is perhaps God’s sense of humor that Joseph was granted the miraculous ability to fly, since he had so much trouble on the ground.

Saint John Vianney was an academic disaster—so much so, that he was nearly denied the priesthood. Writing of Saint John Vianney, Father George Rutler observes, “The greatest confessor possibly in the history of that sacrament and the man who spent three-fourths of his life in the confessional was denied faculties for hearing confessions for several months on account of his problematic academic record.”

But so what if Vianney had not been a priest? What real difference would that have made? For an answer to that question, let’s turn to an unlikely source: the devil.

Speaking through a woman who was possessed before Vianney performed an exorcism, the devil said to Vianney, “If there were three like you on earth, my kingdom would be destroyed. You have taken more than eighty thousand souls from me.”

Oh, did I mention that Father Vianney did poorly in class?

Students, never define yourself by a grade. Doing so tends to involve either pride or frustration, and neither assists you in your journey toward God. Whatever your grade—on the CLT or any other test you ever take—you only have one ultimate boast, and one ultimate comfort: God loves you. That’s the lesson of Bernadette and Joan and Joseph and John, four of the finest and most creative teachers—and students—in history.