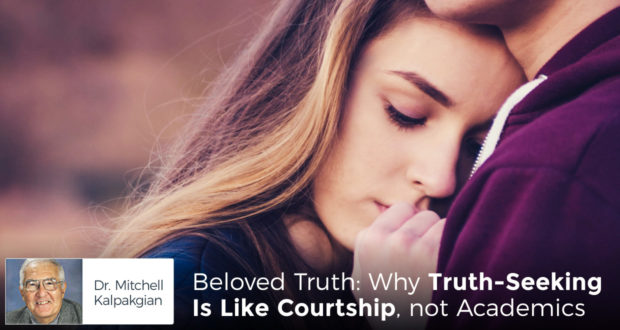 Beloved Truth: Why Truth-Seeking Is Like Courtship, not Academics

In a modern cultured indoctrinated by “the dictatorship of relativism” that Pope Benedict XVI identified as the root of intellectual and moral confusion, the reality of universal truths, timeless wisdom, and unchanging moral laws does not inform or inspire modern education.

In this climate of moral relativism the modern mind doubts the existence of moral absolutes and intrinsic evils, adopts the notion of truth as subjective, evolving, and changeable, or exalts “diversity” to the point that all religions, political philosophies, and ideologies have equal claim to authority and respect.

This attitude regards the prospect of truth as unattainable, contradictory, or futile. It reflects the cynical contempt of Pontius Pilate for Christ’s claim of bearing witness to the truth: “Pilate said to him, ‘What is truth?’” (John 18: 36).

Both classical philosophy and the Bible, however, show the way to discover truth and overcome relativism by a natural comparison: seeking the truth resembles a man striving to win the heart of the beloved. A lover of truth and a man in love must both desire, pursue, persevere, and rejoice.

Wisdom does not surrender to anyone but only to the pure in heart, those who truly love her for her own sake and not for any selfish motive.

The beloved does not return a man’s love unless convinced of his worthy character and honorable intentions.

The lover of wisdom and a man in love must seek as well as desire. The thinker asks, searches, dialogues, studies, and reads to learn; the lover initiates, approaches, calls, courts, and woos. Desiring inspires seeking.

This courtship allows Truth to determine whether or not the motives of the pupil are disinterested and high-minded or worldly and small-minded.

The courtship of the woman permits her to determine whether the man really loves her for who she is, body and soul, or merely pretends to love her for his own selfish pleasure. Truth and Love refuse to compromise their standards to accommodate the impure, half-hearted or lukewarm.

Plato stated that if anyone ever beheld Wisdom herself in all her beauty, her irresistible attraction would move him to fall in love and submit to her goodness. The grandeur of the truth moves the will to surrender just as the beauty of the beloved melts the heart of the lover to abandon himself and commit to undying love. The quest for truth engages the heart as well as the mind and demands passion and desire.

Philosophy: A Love of Truth

The word “philosophy” in Greek (philo-sophia), means not a search or study but a “love” of truth with a natural power of attraction. Socrates, the father of Greek philosophy, not only sought the truth with the ardent desire of a lover but also rejoiced in the truth as a priceless heavenly gift, cherishing the truth as a treasure.

After seeking and finding wisdom, he defended the truth from the attacks of the Sophists in the courts of Athens, teachers notorious for making the weaker argument the stronger and viewing truth as relative like Pontius Pilate.

Socrates not only defended his love of wisdom before his critics but even suffered for the truth, accepting the death sentence of the court rather than agreeing to stop teaching and practicing philosophy.

Loving the truth and winning the beloved inspire conviction and courage, the determination to suffer for the truth regardless of the price to be paid or to be faithful in love for better and for worse till death do us part.

The Song of Solomon also compares the quest for wisdom to a lover’s desire for marriage. The bride longs for the bridegroom:

Truth Needs to be Desired

The truth in its splendid majesty and the bride in her irresistible beauty move and win the heart with their superabundant goodness:

Truth needs to be desired, sought, embraced, honored, and protected. Without these proper manners in courting the truth, the truth hides and does not reveal itself to the base, the lazy, and those who have eyes but do not see.

As Cardinal Newman explains in his sermon “Truth Hidden When Not Sought After,” the great stumbling block to seeking, loving, possessing, and rejoicing in the truth stems from apathy, a symptom of the sin of sloth known in Latin as acedia—the luke-warmness that fails to love the beauty of goodness and truth and hate the ugliness of evil and sin.

This indifference to the best and the worst, then, assumes the guise of tolerance and broadmindedness that views truth as subjective and fluctuating, splintered into as many opinions as there are people. For Newman, however, men tolerate darkness, skepticism, or relativism over light because they do not seek to know or desire to love:

“If men turn unto fables of their own will, they do it on account of their pride, or their love of indolence and self-indulgence.”

The Indifferent Lack Will Power

Unlike the true philosopher who loves wisdom or the fervent lover who is ravished by the beauty of the beloved, the indolent do not pursue the good with all their mind, heart, strength, and will. They lack earnestness and intensity in a matter of supreme importance. They respond with insensibility instead of wonder to the magnificence of the great.

Newman diagnoses the problem of indifference as a lack of effort and will power:

Doubtless if men sought the truth with one tenth part of the zeal with which they seek to acquire wealth or secular knowledge, their differences would diminish year by year. Doubtless if they gave a half or a quarter of the time to prayer for Divine guidance which they give to amusement or recreation, or which they give to dispute and contention, they would be ever approximating each other.

In short, truth exists as a shining light or beacon, not a lamp to be buried under a bushel, and beauty exists to evoke wonder, to awaken desire, and to attract the mind and heart to the truth that is beautiful and to the beautiful that is true.

To discover the truth or to fall in love demands change, commitment, and abandonment. The truth does not accommodate man’s wishes or adjust to man’s standards. On the contrary, man rises to the heights of Truth’s eminence just as the lover elevates his manners and morals to win the heart of the bride.

Living under the illusion of relative truth, however, makes no demands of intelligence, excellence, heroism, or sacrifice. It tolerates good and evil, beauty and ugliness, and wisdom and ideology as if nothing matters except the comfort of doing nothing.