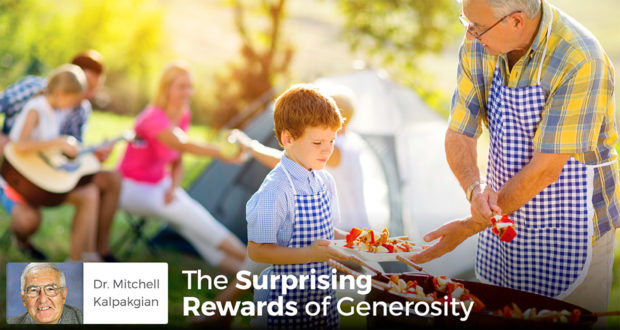 The Surprising Rewards of Generosity

Christ asks us to give unselfishly for His sake. However, Mitchell Kalpakgian discusses how such generosity is always rewarded, often in surprising ways!

Some people never give, even though they are endowed with wealth. They belong to the rank of the miserly ruled by avarice like King Midas or Shylock in The Merchant of Venice.

Some people give in order to receive or give with the expectation of reward.

They assume that every favor they bestow deserves recognition and entitles them to some gift in return.

It is as if they keep an account or record which they examine to maintain a balanced budget.

Others give gladly without expecting to receive, do good anonymously, and follow Christ’s teaching about almsgiving—not to let the left hand know what the right is doing.

While they cast their bread upon the waters and forget the good deed they have bestowed, this gift or favor does not disappear or die. Good deeds done secretly in the night like the favors of fairies have the potent powers of life-giving seeds that bear fruit.

The mystery of giving and receiving that defines the greatness of love, noble friendship, or charity defies calculation.

No one can expect, predict, or guarantee any return for specific good deeds or special favors, yet these acts—like God’s word—do not return void. All forms of goodness carry a grace attached to them. Without deliberate intentions of making anyone beholden, love by its very nature “obliges.”

To receive good deeds, favors, and blessings evokes gratitude, the impulse to reciprocate and return love for love but not in any compulsory way of repaying some debt.

Acts of love, however, do not “oblige” in a legal or contractual sense but move a person to remember the kind deed and to respond in a similar way, but not by a certain date or by some identical gift.

Love is always new, creative, and imaginative, and it returns and repays gifts spontaneously in its own special time, in its own unique expression, and in the random spontaneity of a surprise.

Even ancient proverbial wisdom illuminates this paradox of giving and receiving.

Aesop’s fable of the dove and the bee tells of a bee carried away by the current when it attempts to drink from a stream.

When a dove sees the plight of the bee, the bird throws a branch into the river that allows the bee to return to shore.

The bee remembers and appreciates the deed, feeling the unspoken obligation of goodness. At some later time, when a fowler prepares his net to catch the dove, the perceptive bee stings him on the heel, diverts him from ensnaring the dove, and gives the alarm to the bird.

Oliver Goldsmith’s version of the story adds this moral: “Charity will have its rewards one time or another.” No schedule, date, or requirement dictates the time, place, or manner of love’s giving.

Goldsmith attributes the bee’s special favor to an unforgettable sense of gratitude for the time the dove saved him from the river: “Hail gratitude! . . . /The greatest blessing the feeling bosom knows, / The source whence every gen’rous action flows.”

In the Grimm folktale, “The White Snake”, the king’s servant, observing three desperate fishes struggling on land panting for water, throws them into the stream and hears their appreciation for his favor: “We will remember and reward thee, because, thou hast delivered us.”

Later, the servant, hearing the ant-king’s lament about horses treading on ant hills, bypasses the ant colonies and does not crush the insects.

He hears similar words: “We will remember and reward thee.” A third time the servant performs a good deed and forgets about it as undeserving of recognition. Young ravens starved and driven from their nests plead that they cannot fly or feed themselves.

The kind man kills his horse and leaves the animal for the ravens to devour, again hearing the familiar words: “We will remember and reward thee.”

Forgetting about these small favors as unworthy of reward, the servant turns his attention to the love of a princess.

To win his bride, he must pass three great tests or lose his life: first, he must retrieve a golden ring thrown into the sea. If he fails, “you shall be put under the waves again and again until you are drowned.”

As the servant ponders his dilemma, three fishes swim to shore, one with a mussel in his mouth that contains the ring.

Next, he must collect by the next day ten bags of millet seed spilled on the grass. In the night, thousands of ants gather all the seed and fill the bags. In the final test, the servant must bring the bride an apple from the tree of life.

Without any idea of where to look for this apple, he travels through many lands without success until he awakes one morning to find the apple in his hand and hears “We are the three young ravens you delivered from starving.”

Without the fish, ants, and ravens—the good deeds he offered without any thought of reward—he would not have won the great prize of the princess’ love. Love obliges, the good deed is not forgotten, and giving with a pure heart invites some surprise in the future that far surpasses the original favor.

Shakespeare’s The Merchant of Venice also shows the higher laws that capture the mystery of giving and receiving. To court Portia, a woman of rare beauty and “wondrous virtues” as renowned as Cato’s honorable daughter by that name, Bassanio begs a great favor of his loyal friend Antonio.

He asks Antonio for the loan of a large sum of money, even though he has not repaid a previous loan. Having no money to loan because his merchant ships have not yet returned with profits, Antonio borrows the money from the notorious moneylender Shylock.

Antonio not only agrees to the usurious loan but also the terms of the contract that require the penalty of “a pound of flesh” for late payment.

Thanks to Antonio’s generosity that gives without counting the cost, Bassanio wins the hand of Portia by taking his chances in the lottery devised by Portia’s father.

Portia, who longed and hoped for Bassanio to choose the right casket, rejoices at her good fortune: “That only to stand high in your good account,/I might in virtues, beauties, livings, friends,/ Exceed account.”

Grateful for Bassanio’s generous heart in giving and hazarding all and most appreciative for Antonio’s sacrifices for her husband, Portia will not be outdone in generosity. On the day of the loan’s payment when Antonio’s ships have not returned to relieve him of his debt, Portia offers her fortune to pay Shylock.

She even disguises herself and goes to the court to plead as Antonio’s lawyer, winning the case because she interprets the law as literally as Shylock does. His pound of flesh does not specify any blood: “This bond doth give thee here no jot of blood. / The words expressly are ‘pound of flesh’.”

Portia wins the case, and Antonio’s generous gift to Bassanio is repaid from an unexpected source, the surprise of Portia coming to the trial in disguise and defending him in a court of law. To give without expecting to receive is to be surprised in unforeseen ways that offer more than the original gift.

Antonio gives to Bassanio without worrying about the time of repayment. Bassanio gives and hazards all in choosing the lead casket.

Portia, touched by Bassanio’s courtship that disregards gold and silver and moved by Antonio’s boundless generosity that does not worship money, blesses both Bassanio and Antonio. Antonio gives to Bassanio who gives to Portia who gives to Antonio not only the fortune to pay his debt but also the friendship and gratitude that saves his life.

No one should ever underestimate the power of a pure gift or a kind deed.