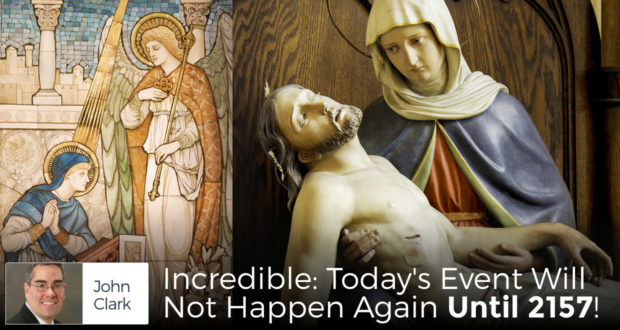 Incredible: Today’s Event Will Not Happen Again Until 2157!

Today presents a liturgical ‘difficulty’: it marks Good Friday and the traditional date of the Annunciation. John Clark unpacks this once-in-lifetime event!

Today, March 25, presents a liturgical difficulty of sorts: this day marks Good Friday and the traditional date of the solemnity of the Annunciation.

Though it was believed by some Church Fathers that Gabriel appeared to Mary on March 25, and that Our Lord’s passion and death also occurred on March 25, it is rare for Good Friday to fall on March 25.

It has occurred twice so far this century but will not happen again for another 141 years. Christianity is known for irony, and to commemorate His Incarnation and His Passion and Death on the same day is perhaps not lacking in that department.

Mariology (the study of Mary), once a branch of theology that came so naturally to the Fathers and Doctors of the Church, has become almost a lost art in the science of theology. It is often confused with Mariolatry (the worship of Mary) of which Catholics are sometimes accused, but which is perhaps the rarest sin in the entire penitential lexicon.

In addition to other influences, evangelical theology has clouded Mariology considerably, relegating Mary to a compassionate, but largely uninformed minor character; she is often seen as a mere onlooker in the events of the passion and death of Jesus. The Passion of the Christ notwithstanding, this perspective is often shown in movies about Jesus.

Of course, many of these same movies get Christology so profoundly wrong that the question of Mariology becomes a secondary concern. For instance, movies in which Jesus “discovers” that He is God don’t pass the litmus test of metaphysics, logic, or epistemology, to say nothing of Scriptural or doctrinal observance. And if you get Christology wrong, how can you get Mariology right?

But on a positive note, if you get Christology right, you are much more likely to have a meaningful and honest view of Mary and Mariology. And the essence of Mariology consists in the fact that Mary played an essential role not only in the Incarnation, but also in the Redemption.

There are many ways to consider this reality, but as part of today’s observance, it’s worth thinking about two paragraphs from the Second Vatican Council document Lumen Gentium:

61. Predestined from eternity by that decree of divine providence which determined the incarnation of the Word to be the Mother of God, the Blessed Virgin was on this earth the virgin Mother of the Redeemer, and above all others and in a singular way the generous associate and humble handmaid of the Lord. She conceived, brought forth and nourished Christ. She presented Him to the Father in the temple, and was united with Him by compassion as He died on the Cross. In this singular way she cooperated by her obedience, faith, hope and burning charity in the work of the Savior in giving back supernatural life to souls. Wherefore she is our mother in the order of grace.

62. This maternity of Mary in the order of grace began with the consent which she gave in faith at the Annunciation and which she sustained without wavering beneath the cross, and lasts until the eternal fulfillment of all the elect. Taken up to heaven she did not lay aside this salvific duty, but by her constant intercession continued to bring us the gifts of eternal salvation. By her maternal charity, she cares for the brethren of her Son, who still journey on earth surrounded by dangers and cultics, until they are led into the happiness of their true home. (Emphasis mine.)

Clearly, Mary is the central and only human person present at both the Incarnation and the Passion and Death of Our Lord. And, as this document reminds us, as we kneel at the foot of the Cross today, she is with us still, and waits to greet us in Heaven with her Divine Son.

Today, let’s pray that the significance of March 25 causes us to think more about the role of Mary in salvation history, and the role that she can have in our own lives, if only we embrace her. Many Christians have already waited far too long to embrace her and recognize her role as Mediatrix.

Let me close with a beautiful liturgical prayer that we Byzantines say very often in recognition of her motherhood of God, her love for us, and our love for her.

It is truly proper to glorify you, O Theotokos,
the ever-blessed,
immaculate,
and the Mother of our God.
More honorable than the Cherubim
and beyond compare
more glorious than the Seraphim;
who, a virgin,
gave birth to God the Word,
you, truly the Theotokos,
we magnify.