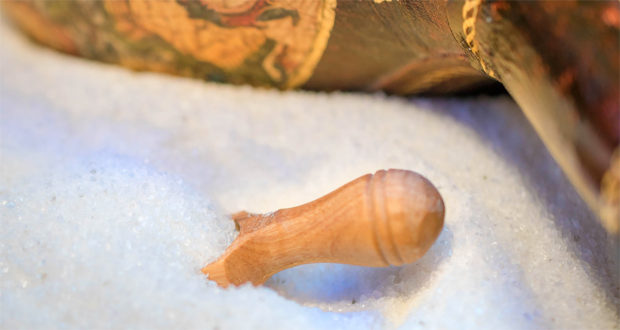 ‘Salt of the Earth’: Hans Andersen Explains This in a Fairy Tale

What does it mean to be the salt of the earth? Dr Mitchell Kalpakgian finds a valuable example in the story of the ‘Flying Trunk’, great for reading aloud.

While people receive praise and kudos for many achievements and extraordinary feats—academic honors, the completion of a degree, the publication of a book, victory on the athletic field, a political appointment, or a promotion—persons do not often receive honor or compliments for the virtue that Christ praises in calling his disciples “the salt of the earth”:

“You are the salt of the earth: but if the salt has lost its taste, how shall its saltiness be restored?” (Matthew 5:13).

As a simple staple of daily life, salt plays a vital role in the preserving and seasoning of food but does not qualify as an expensive imported spice or exotic luxury.

The salt of the earth is comprised of the ordinary men and women of the world who perform all the essential tasks that sustain life and serve the basic human needs of others. They do good work with care, love, and humility, not seeking fame, distinctions, or worldly honors.

The regular business of farming, cooking, cleaning, caring for children, teaching, healing, and repairing all represent the virtues associated with those who belong to the salt of the earth.

They are the people who do their duty, who strive to please others, and who do not complain about the difficulty or monotony of the task because they know that to work is to pray. They are responsible, reliable, conscientious workers who put their hearts and souls into their labors of love and feel a sense of vocation and dedication to their work.

The salt of the earth have “character.”

Their word means something. They keep their promises and fulfill their obligations in quiet, unassuming ways that make life habitable, enjoyable, and comfortable for all. Without the savor of the salt, daily life easily becomes colorless, odorless, and tasteless.

A Tale of Matches, Pots &  More

In Hans Christian Andersen’s “The Flying Trunk,” the merchant’s son, courting the daughter of a king and queen by posing as a Turkish god, wants to impress her parents by his storytelling.

Informed that the queen admires stories that have a serious moral and the king enjoys humorous tales that produce a laugh, the merchant’s son entertains his hosts with the tale of the matches and the household objects in the kitchen.

The matches, boasting of their “high ancestry” in the form of a great pine tree, assume an air of importance because of their pedigree. Because of the priority the matches receive in the kitchen as the first object the maid uses when she lights the stove, their pride swells at their high position in the household.

The matches also adopt an air of superiority because of the brilliance of the fire they enkindle: “What radiance we have!” When they compare their lineage, their first rank, and the beauty of their light to the other plain objects in the kitchen, the matches bask in their vainglory and look with scorn at the other household items: “What a common lot they are!”

Soon all the household items in the kitchen debate the topic of importance. The iron saucepan argues that constant daily use (“I’ve been scoured and boiled time and time again!”) makes him more important than the matches because of his durability and dependability.

The tinder box, earthenware pot, water bucket, tea urn, and shopping basket also enter the conversation to prove their worth in the kitchen. They perform daily chores reliably and consistently. They are tried and true, enduring and trustworthy.

Although they lack the luster and lineage of the matches, their constancy provides humble service for the needs of the kitchen throughout the course of a lifetime. Like the old quill pen, they have no power of attraction, but they undergo frequent use and perform year after year. The kitchen does not function without these common items.

The old quill pen has no noble family ancestry and no splendor of radiance to compare with the brightness of the matches’ flames. The plain pen is neither striking nor spectacular: “There was nothing remarkable about her, except that she had been dipped far too deeply in the ink-bottle.”

No matter how much the quill pen has written, how many times the iron sauce pan and the earthenware pot have cooked meals, how much water the tea-urn has boiled, how many times the water bucket has been filled, or how many trips the shopping basket has made, no one convinces the matches that all the objects in the kitchen have their importance and serve a good purpose.

As they are comparing their merits, the maid enters the kitchen and strikes a match to light the oven. The matches assure themselves of their victory in the argument: “‘Now,’ they thought, ‘everyone can see that we’re the most important people here! . . . What enlightenment!’ And then they burnt out.”

The matches, then, produce a spectacular light and then disappear. Their bright light does not last beyond a moment. They do not repeat their performance in any steady, regular, habitual way like the other objects in the kitchen which they scorn as “common.”

Salt of the Earth?

While they boast of their importance, rank, and radiance, the matches do not deserve the title of “salt of the earth.” Other criteria besides ancestry, first place, and bright appearance determine a person’s character.

While the idea of comparing rank and status originates with the matches, the other items in the kitchen never make these distinctions or conceive of a hierarchy of importance. They simply perform their daily duty with modesty and diligence. They execute these responsibilities every day without seeking recognition or publicity.

The salt of the earth, then, do their work with humility, care, and thoroughness, always desiring to please others first rather than seeking their own glory. They may look old, worn, and weathered and have no luster, but they have passed the test of time. They may not have a distinguished pedigree, but they prove themselves every day by their trustworthiness.

While the match makes a short bright appearance that quickly disappears, the other household items work every day with unfailing regularity. The salt of the earth complete their tasks, do their best work, meet their deadlines, keep their word, do not exaggerate their accomplishments, earn an honest living, and have a sense of honor and self-respect.

Sadly, the merchant’s son who told the story of the matches to gain favor with the king and queen failed to apply the moral of the tale to his own life. Like the prodigal son, he wasted his inheritance. Irresponsible with his father’s fortune, he lived to eat, drink, and be merry and “made paper kites out of ten-shilling notes, and played ducks and drakes on the lake with golden sovereigns instead of pebbles.”

Like the matches that produce fire, he makes a spectacular appearance of fireworks in the sky with his magical flying trunk: “And so he bought rockets and crackers and every sort of firework he could think of, put them in his trunk, and flew up in the air with them.”

When the dazzling display of fire ends and the merchant discovers the fireworks burned his flying trunk, he learns that he cannot attend his wedding:

While the salt of the earth fulfill all obligations and perform all tasks in a timely way, the merchant’s son is not even in attendance at his own wedding.

Imagine a world with only matches and merchant’s sons in the kitchen and on the job.

It is the salt of the earth that make the world go round, and it is the iron sauce pan, water bucket, and shopping basket that keep the household furnished, stocked, fed, and functioning day after day and year after year.