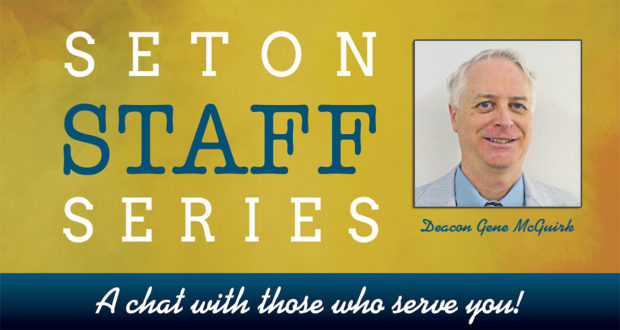 Seton Educates Students to Get into Heaven…and Harvard Too

Seton Home Study School’s Deacon Gene McGuirk, says that a Seton education not only prepares your children academically but for entry into heaven as well.

“Before joining Seton in 2002,” says Deacon Gene McGuirk, Head of Academic Counseling, “I spent eight years with Doll Medical Research, then almost twenty years with Avis, and finally with Thomas Jefferson Classical Academy right before coming to Seton. I was never unhappy in any of these positions, but I truly love what I do at Seton.”

Deacon McGuirk began by serving students and their families in admissions, but after two years moved to the counseling department. In addition to his previous work experiences, he brought other gifts to Seton: two master’s degrees—he is working on a third in theology—and a familiarity with the program, as he and his wife had used Seton for their four children since 1995.

Deacon McGuirk specializes in counseling students in chemistry, logic, accounting, and, on occasion, religion. He and other members of the staff also keep close tabs on Seton’s high school students and their credits, making certain that when graduation rolls around, they have the required hours and courses to receive their degrees. He frequently reminds students intent on college to become familiar with the admissions requirements of the schools they wish to attend.

Like others on the staff, he is proud of Seton’s reputation. When Deacon McGuirk first began working in admissions, an Air Force captain, an attorney, called and explained why he was interested in Seton for his children.

He had taught law at the US Air Force Academy and found two cadets who stood head and shoulders above their peers, all of whom, as the captain explained, were the “cream of the cream of the crop.” He investigated the backgrounds of these two young people. “Not only were they both homeschoolers,” he told Deacon McGuirk, “but they were also both graduates of Seton.”

He pauses, then smiles. “But Seton can help you get into both.”