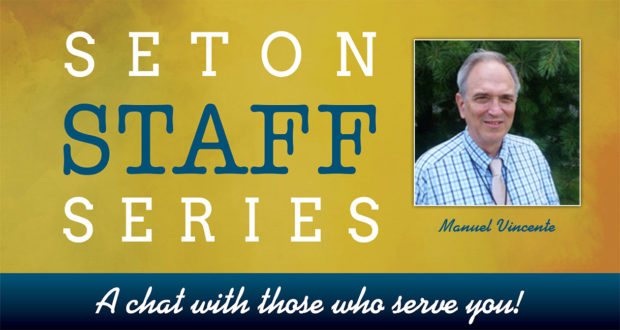 Seton Home Study’s Manuel Vicente – Spanish and science counselor, has this advice for homeschooling families, “Keep the Faith and persevere in what you are doing…Don’t let yourself be swayed away from what God has inspired.” 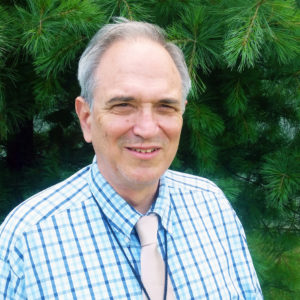 The son of Cuban exiles—the family fled Cuba when Manuel was five years old— he grew up in Miami, Florida, and attended Florida State University, majoring in meteorology. After graduating in 1978, he served as a weather officer in the United States Air Force. Following his military service, Mr. Vicente taught school, tested inmates for the Florida prison system, and was a weatherman in Spanish-language radio and television.

Always on fire with his Faith, before joining Seton in 2003, the Vicente family traveled to Peru where he served as a missionary and educator.

When asked what particular talents his background had given him for helping Seton students, Mr. Vicente replied, “Being able to deal with all kinds of people.”

He went on to explain that the various positions he had held and places he had worked—the Air Force, the prison system, his time on radio and television—had put him into contact with a wide range of people. He also felt that his time as a weatherman had helped him develop a more outgoing personality.

“I would say keep the Faith and persevere in the holy work you are doing for your children. My own family kept getting dragged away from homeschooling, but we always came back to Seton. Don’t let yourself be swayed away from what God has inspired.”

Mr. Vicente and his wife Ileana have four children. Their son, who has earned his MBA from Florida State University, currently serves in the United States Army Signal Corps. Two of their daughters are Christendom College graduates, the older of whom is in Colombia encouraging homeschooling. Her sister, a talented musician and teacher, is working from home while helping with her mother’s medical treatments. The Vicente’s youngest daughter is finishing high school.

Please keep the family in your prayers as they assist Mrs. Vicente in her ongoing cancer treatment and healing.